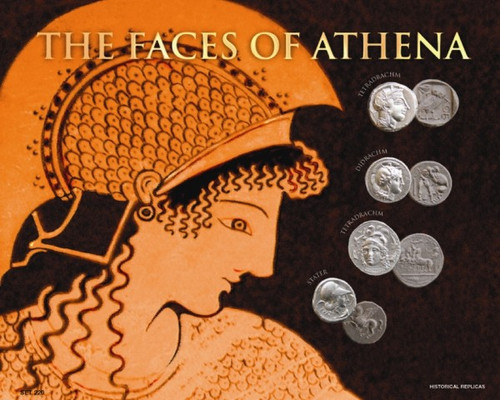 The Greek philosopher, Plato noted similarities between the Greek goddess Athena and the Libyan deity, Neith, who is said to have been born beside Libya's Triton River. Neth was adopted by Egyptians as the war-goddess and huntress deity. Whatever her origins, by the late fifth century, the goddess Athena place in Classical Greece was assured. Athena, is known as the Greek goddess of wisdom, household arts and crafts, spinning and weaving, textiles, and inventor of the flute, and the chariot. Athena, a goddess of war strategy, was the guardian of Athens, and defender of heroes, champion of justice and civil law. By 550 B.C., the practice of striking and using coins was established throughout important trading centers of Greece. These included both the independent city-states inside Greece, as well as the colonies outside of Greece. The practice of using coins for commerce coincides with the beginning of the Classical Period of Greek art, architecture, and culture. The Greek Classical Period heavily influenced the cultures of ancient Rome, and had an enduring effect on European civilization. Indeed, much of modern politics, artistic thought, scientific thought, literature, and philosophy derives from this period. Our Historical Replica Sets presents the faces of Athena appearing on four ancient Greek coins. These double side replicas represent excellent examples of the Classical Period of Greek art. The first portrait is an early example of Athena from Attica, Greece - City-State of Athens (Athena, patron and protector of Athens) This is a tetradrachm of Athens 449 to 413 B.C. Obverse: The head of Athena facing right wearing crested helmet ornamented with olive leaves and floral scroll. Her hair is drawn across the forehead in parallel curves. Reverse: Owl standing right head facing in erect posture. The tail feathers represented as single prong. To right ??? in large letters; to the left an olive twig and crescent, all within a incuse square.(Sear 2526) The second portrait is a late example of the Classical Period from the Greek colony of Luciana, Italy - a didrachm of the town of Herakleia 370 to 281 B.C. Obverse: Head of Athena facing right wearing crested Athenian helmet ornamented with Scylla hurling stone. Reverse: Herakles (Hercules) naked standing facing with head and body turned right, strangling lion with both hands between legs. An owl to right and club in left field. (Sear 389) The third portrait of Athena is one of the finest examples of art in the Classical Period. This coin was struck in the Greek colony of Syracuse, Sicily - a silver tetradrachm by the artist Leonidas (413 to 405 B.C.) Reverse: The head of Athena three-quarter face to left with hair hanging loose in curls, wearing a richly ornamented triple-crested helmet inscribed with artists signature. Four dolphins around her head. Obverse: A galloping quadriga (chariot) driven right by Persephone carrying a flaming torch. She is about to be crowned by Nike flying right. Below an ear of corn. (Sear 941) The fourth portrait is a later Classical Period of Illyra and Central Greece - City-State of Corinth - a Corinthian Stater (400 to 350 B.C.) Reverse: Shows the head of Athena facing right wearing a Corinthian helmet over leather cap. Around Athena are three dolphins. Obverse: Pegasus facing left. (Sear 2628) Each coin is stamped COPY on the reverse in compliance with Hobby Protection Act.