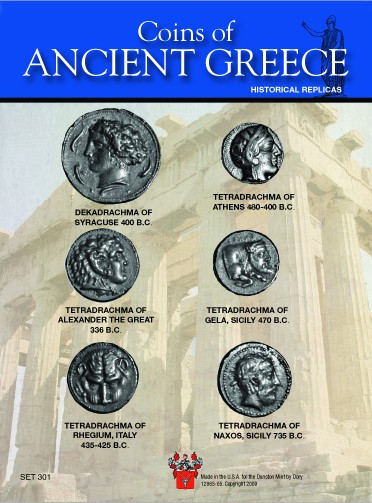 Our Historical Replica Sets contain six artistic examples of two sided coins of ancient Greece minted from 735 to 300 B.C. These coins were made by the towns and city states throughout Greece and its colonies. The first coin is a reproduction of a silver dekarachm of Syracuse by the artist Kimon. The coin was minted between 405 and 380 B.C with the obverse shows the head of Artemis-Arethusa. The reverse shows a slow quadriga driven by a male charioteer crowned by Nike. This coin is considered one of the finest examples of the Classical Period of Greek art. (Sear 952) The second coin is a replica of the famous Athena tetradrachm struck between 455 - 449 B.C. The obverse shows the head of Athena, patron god of Athens, facing right wearing crested helmet with olive-leaves and floral scroll. The reverse shows an owl standing right with its head facing right. The inscription ???, with the ?live twig and crescent, all within incuse square. (Sear 2526). This coin is probably one of the most famous of all Greek coins. The third coin is a replica of a Alexander the Greats silver tetradrachm. The obverse of Alexander portrayed as Hercules facing right and wearing a lions scalp. The reverse shows the Head and neck of a horse with a palm tree in back. Struck between 325 and 300 B.C. (Sear 6436) Alexander is credited with spreading Greek language and culture throughout the ancient world though his conquers. The fourth coin is a tetradrachm of Gela, a prosperous Sicilian town during the last part of the 5th Century B.C. The obverse shows the forepart of a man-headed bull, the river god named Gela. The reverse shows a slow quadriga driven by a charioteer. This original was struck between 480 and 470 B.C. (Sear 785) This fifth coin is a reproduction of a Greek silver tetradrachm of the city of Rhegium. The obverse shows a lion's scalp facing the viewer. The reverse shows Iokastos the founder of the city. He is naked to waist and seated left holding a staff and resting his left hand on his hip all within a laurel-wreath. The original was struck between 466 to 451 B.C. (Sear 498). The last coin in is a reproduction of a tetradrachm from the ancient city of Naxos. This coin dates from 430 and 413 BC with the obverse shows the bearded head of Dionysos whos hair is bound with a broad band. On the reverse a naked Silenos is holding a thyrsos in left hand. (Sear 875). All coins are two sided, made of lead free pewter, and are marked COPY on the reverse in accordance with the Hobby Protection Act.