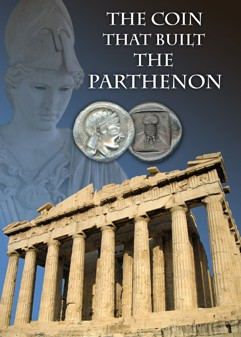 The Coin That Built The Parthenon - Athen Greece 447BC - Replica Coins

Throughout the 5th century B.C. Athens was the mistress of the Aegean world and the great political and cultural center of the ancient world. In 480 B.C. the existing temple on the Acropolis of Athens was destroyed by the Persians. From 478 to 413 B.C. Athens appropriated 5,000 talents of silver from Delian League funds, with a portion of these funds used to rebuild and finance the largest building projects in Greece. This included the rebuilding of the Athenian temple on the Acropolis. In 447 BC Pericles started construction of the new temple, the Parthenon. Dedicated to Athena, its name most likely comes from the cult statue of Athena Parthenos, housed in the temple building. The sculptor Phidias was hired to work on the Parthenon. The statue of Athena was installed in 438 B.C. It was made of gold and ivory and stood 40 feet high. Athena was dressed in full armor with a shield in one hand and a 6 foot statue of Victory in the other hand. Iktonos and Kallikrates were the architects of the Parthenon. Surrounded by a colonnade, the main room contained the statue of Athena adorned with smaller statues depicting Athena' life. The marble Parthenon is an excellent example of Doric design with Ionic architectural features. The dimensions of the base of the building are 228 feet long and 101.4 feet wide. The exterior columns are 6.2 feet in diameter and 34.1 feet high. The Parthenon cost 469 silver talents to build. Translated into 2010 prices, one talent of silver is equal to 82.25 pounds or 1199.479 troy ounces. With spot silver at $17.36 USD, one silver talent is worth $20,822.9554 USD. Therefore, the Parthenon cost $9,765,966.08 = (469 talents x $20,822.9554). Athens produced an enormous issue of one particular silver coin to finance construction of the Parthenon. A large 42 gram silver deckadrachm was struck. Our Historical Replica Sets presents a lead free pewter replica this Greek silver deckadrachm. The obverse of the deckadrachm shows the head of Athena facing the left wearing a crested helmet with two olive leaves and a floral scroll. (Athena was the patron goddess of Athens.) The reverse shows an owl (which represents the city-state of Athens) standing facing forward, wings spread with an olive twig in upper left. Word 'Athens' on lower right. All the obverse is within an incuse square. The owl also The Athenian Deckadrachm was issued from 467 to 465 B.C. (Sear 2516) Today, less than thirty original deckadrachms exist. Ten are owned by museums and private collectors. The Turkish government owns 20 originals of this coin. The silver deckadrachm and the Parthenon remain the finest examples of Greek art and architecture in the ancient world. The modern world is indebted to Athens' cultural and political legacies. This double sided coin is a reproduction of an original coin in a private collection. It is made of lead free pewter. In accordance with the Hobby Protection Act, the word COPY is struck on the obverse below the owl.