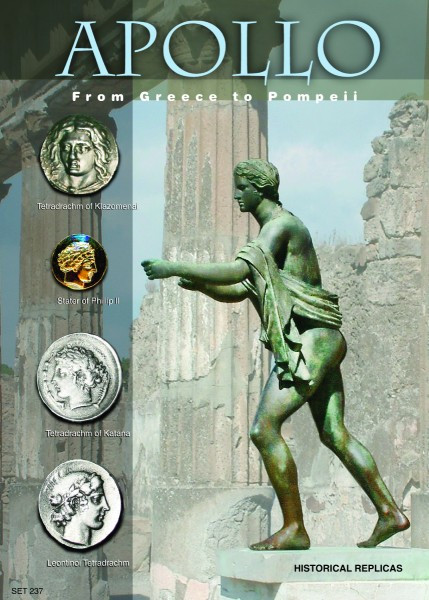 Apollo is one of the most important of the Olympian gods. The son of Zeus and Leto, Apollo is described as the most Greek of all gods. Apollo represents the ideal of athletic youth portrayed in Greek and Roman religion, art, and literature. Apollo is the god of light and the sun, truth and prophecy, medicine and healing, music, poetry, and the arts. He represents harmony, order, and reason. Our Historical Replica Sets presents four ancient Greek portrait coins of Apollo The first coin of Apollo is an Ionian tetradrachm of Klatomenai (480 to 450 B.C.) The obverse shows the head of Apollo with three quarters face to left. The reverse shows a swan facing left with wings spread. (Sear 4315) The second coin is a Macedonian stater of Phillip II. (369 to 336 B.C.) The obverse of this gold coin shows the head of Apollo facing right. The reverse shows a galloping biga. (Sear 6663) The third Apollo coin shows a tetradrachm of Katana (420 to 404 B.C.) The obverse shows Apollo with short hair facing left and a laurel sprig. The reverse shows slow biga right with Nike crowning the horses. (Sear 768) The fourth coin is a Leontinoi tetradrachm (425 to 422 B.C.) Obverse shows radiated head of Apollo facing right, a fine portrait. The reverse shows lion head facing right with mouth open; three corn grains and fish surrounding the lion. (Sear 838) Apollo was the prophetic deity at Delphi. In the 5th Century B.C., tradition says the early kings of Rome traveled to Greece to consult the Oracle of Delphi. By 430 B.C., a Roman temple to Apollo existed in Rome. Apollo was considered one of the three protector gods of Pompeii, along with Venus and Jupiter, and a temple to him may have existed as early as the 6th century B.C. Each coin in this set is stamped COPY on the reverse in accordance with the Hobby Protection Act.