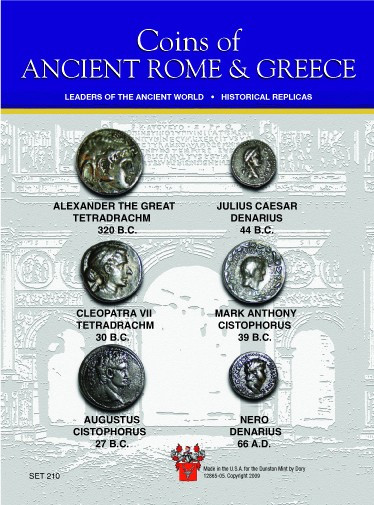 The Coins of the ancient world were struck by hand from metal dies made by skilled engravers. The metals used were gold, silver, or bronze. Our Historical Replica Sets represents leading historical Greek and Roman leaders whose physical likeness appears on the coin's face. All six replicas were originally hand struck in silver. These double sided historical coin replicas are made of lead free pewter. ALEXANDER THE GREAT- Tetradrachm This tetradrachm was produced by Ptolemy I of Egypt in 320 B.C. honoring the great warrior king who at the time of his premature death in 323 B.C. had created the largest known empire by conquest. Alexander was a Macedonian Greek whose empire stretched from the Grecian shores of the Mediterranean Sea to India. Alexander is depicted on the coins face clad in elephant skin and aegis. The reverse side shows the goddess Athena advancing right with spear and shield. (Sear 7747) JULIUS CAESAR The most famous of all Romans was Julius Caesar, a great military general, writer, and statesman who is credited with laying the foundation of the Roman Empire. After many years of military campaigning, Caesar returned to Rome and was given the title of 'dictator for life' by the Roman Senate. Very soon after, though, he was assassinated by his political opponents, Brutus and Cassius, on the Ides of March of 44 B.C. Civil strife followed his death. A denarius was minted just prior to his assassination showing the words, Caesar Dict Perpetvo, (Dictator for Life), surrounding his profile. (Sear 1465) MARK ANTHONY, CLEOPATRA VII, AND OCTAVIAN (AUGUSTUS) After Caesars assassination a rivalry for control of Rome took place. Over the next several years Octavian, Caesars primary heir and adopted son, and Mark Anthony, the loyal follower and lieutenant of the Caesar, became rivals and companions in arms. Each never lost sight of his primary aim of becoming the military controlling authority in the Roman world. Together they pursued Caesars assassins and at the battle of Philippi, in Greece, defeated Cassiuss and Brutuss armies, which also resulted in the assassins deaths. Thereafter, the relationship between the rivals became strained until they formally agreed to divide their powers and authority. To help seal the pact, Octavian gave his sister, Octavia, to Anthony in marriage. However this peace was to end when Mark Anthony became romantically and politically involved with Cleopatra, the Egyptian queen, who was of Macedonian Greek descent. The queen was an intelligent and clever person who was attempting to steer an independent course for her country. War was declared on Egypt, and at the battle of Actium located in Greece, Octavian was victorious. Cleopatra and Anthony fled back to Egypt where they committed suicide rather than be captured to be paraded through Rome as prizes of war. With the death of Cleopatra, Egypt became a Roman province in 31 B.C. Four years later Octavian was declared the first Roman Emperor under the name of Augustus and was given supreme power and authority. (Sear 1584). Throughout his reign Augustus used his absolute power wisely. Internally Rome prospered -- public works projects were successfully undertaken, and the Augustus currency system was established. Stability prevailed in the Roman Empire until Augustuss death in A.D. 14. The Mark Anthony cistphorus on its reverse shows the bust of Octavia flanked by two snakes. (Sear 1512). Cleopatras coin was most likely made in Ascalon, Judea, and it shows an eagle standing with closed wings. Augustus produced a vast number of coins. His cistphorus on the reverse depicts a sphinx seated named Augustus. (Sear 7955) NERO Nero was the last emperor of the Julio-Claudian dynasty started by his great-great-grandfather, Augustus Caesar. History does not treat Nero very kindly and for good reason - he was extremely unfit to govern. During the first years of his reign, Agrippina, his mother, exercised considerable influence until Nero expelled her from the palace and eventually had her murdered. Many others met similar fates, including Neros third wife, Octavia. Neros rule was generally unpredictable and despotic - he was more concerned with his passions than with governing. A massive building project created a fiscal crisis, and the devastating fires that razed Rome were blamed on him. Neros excesses and unpopularity did finally bring about his downfall. Calls for his removal and revolts ended with his suicide in A.D. 68. The Nero denarius issued two years before his death shows the personification of the enthroned goddess Salus. (Sear 1932) Based upon the Hobby Protection Act all historical replica coins have COPY on the reverse.