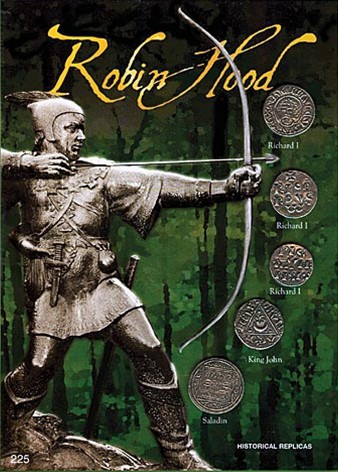 References to Robin Hood began to appear in English sources in the 13th century. By the 16th. century the legend and times of Robin Hood were closely connected to three 13th. century medieval historical rulers. Each made silver coins for trade and commerce in the lands they ruled. Our Historical Replica Sets contains lead free pewter coins of three 13th century rulers closely connected with the legend and times of Robin Hood. First is Richard I, son of Henry II and Eleanor of Aquitaine. Know more as Richard The Lionhearted, Richard's earliest titles included the French titles of Duke of Normandy, Duke of Aquitaine, Duke of Gascony, Count of Anjou, Count of Nantes, and Overlord of Brittany. As Duke of Acquitaine in western France, Richard produced an 18mm French silver coin that reads RICARDVS REX. A second coin Richard produced was as Count of Poitou. He struck a 18mm silver coin that reads RICHARDVS REX. In 1189 Richard was crowned King of England upon the death of his father Henry II. A third coin of Richard was produced in England. This is a 19mm silver Short Cross coin reads HENRICVS REX. All of Richard the Lion Heart's struck in England bore his fathers name, Henry II. The second ruler connected with Robin Hood is King John, Richard's younger brother. From 1190 to 1194 John ruled England while Richard was overseas on the Crusades. After his brother's death in 1199, John ruled England until his death in 1216. The silver coin of King John was issued in Ireland, and was called the Sun, Moon, and Three Stars type due to the devices on the coin.. The third ruler associated in the stories of Robin Hood is actually the famous Moslem ruler, Saladin, the first Ayyubid Sultan of Egypt and Syria. Saladin led opposition to the European Crusaders in the Middle East. The Saladin coin is a replica of a 21mm silver dirham. This was struck in Aleppo, Syria between 1184 and 1185. All coins in this Set have COPY on the reverse in accordance with the Hobby Protection Act.