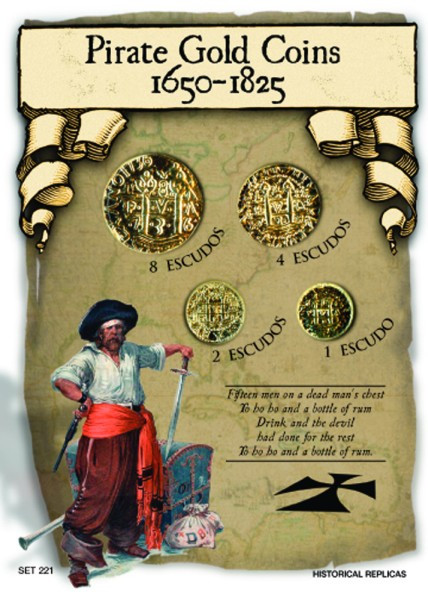 With Christopher Columbus' discovery of the New World, Spain controlled a vast overseas empire with great riches. The Spanish crown needed treasure to fund the frequent wars that depleted the royal coffers. This area of control became known as the Spanish Main. After Hernando Cortez conquered Mexico in 1519, the Spanish used native tribes of South and Central America to mine the gold and silver. The metals were refined and made into coins. Some coins were cut from bars into pieces called 'cobs' (cut off the bars). Other gold and silver coins were made from rolled sheets and blanks using crude dies and presses. Thousands of tons of gold and silver were shipped to Spain. Between 1492 and 1830 the New World produced over 4 billion gold and silver pesos. Carried in the holds of the treasure fleets, these riches drew pirates and privateers. Each year fleets of Spanish ships departed from Havana, Cuba for the return trip to Spain. These Spanish fleets sailed north and east until they reached the latitude of forty degrees. The fleets then turned east across the Atlantic Ocean to Spain. The journey lasted two months. When the Spanish fleets departed from the New World to Spain greater was the risk of encountering a hurricane somewhere along the narrow passage between the Bahama banks and the Florida reefs. When one of the oldest and richest of the treasure galleons sank in 1641, more than forty years passed before the wrecks were discovered and partially recovered. During the Golden Age of Piracy, gold was recovered both from wrecks and attacks on the Spanish treasure fleets and their galleons guarded the king's coffers bound for Spain. A single captured prize could make a pirate rich. As stalwart as the galleon was she was actually quite fragile when pitted against Mother Nature. Spanish gold doubloons in the New World were manufactured or minted in four denominations. The 8 escudo gold doubloon equaled one ounce of gold; the 4 escudo piece equaled 1/2 ounce of gold; the 2 escudo doubloon equaled ounce of gold. One escudo piece was 1/8 ounce of gold. Our Historical Replica Sets includes four double side replica gold coins. These are made of lead free pewter and gold plated. Each coin is marked COPY on the reverse as required by the Hobby Protection Act.