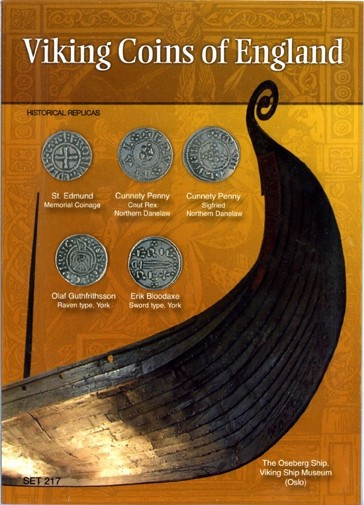 During the 8th to 11th century raiders, conquerors, and colonists from Denmark and Norway plundered the British Isles, during the period known as the Viking Age. In 789 A.D., the Vikings launched the first attack on Britain. By 877 A.D. the Norsemen gained control of two thirds of Britain. The Vikings were finally driven from England in 1085 A.D. Prior to the Viking raids, the Anglo-Saxons were minting a new type of silver coin. These coins were much finer and more attractive than earlier Saxon coinage. These new silver coins were called 'pennies.' The major Anglo-Saxon kingdoms of East Anglia, Kent, Mercia, and Wessex struck and used silver pennies in trade. In England native rulers paid Viking raiders Danegeld or bribes of large sums of silver coins to leave them in peace. The payment of bribes to Viking raiders was so prevalent that the Saxons used lead weights to weigh payments of silver coins to the Vikings. By the late ninth century, the Vikings had established settlements in England. The Vikings produced their own silver pennies. The adoption of Anglo-Saxon coinage was as much political and cultural as economic. The more the Barbarian invaders like the Vikings looked like the civilized people they invading the more the look like them. In the Middle Ages, issuing of coins was one of the established rights associated with Christian kingship. The Anglo-Saxons themselves adopted coinage soon after converting to Christianity. The Vikings did the same. Our Historical Replica Sets includes examples Viking coins minted in England. Early Viking coins types were imitations of established Anglo-Saxon coins. The first coin is a replica silver penny of East Anglia. This Viking coin is a copy of an Anglo-Saxon coin of St. Edmund Memorial penny. Obverse: Shows Alpha with inscription. Reverse: Shows a cross with inscription. (S960) The link between issuing coins and Christian kingship is clear in the coinage of Viking rulers in England. The coins struck in Viking held England, called 'the Danelaw,' carry both Christian and Viking pagan symbols. The second coin is a reproduction of the Cunnetti silver penny of the Northern Danelaw silver penny of the Viking king Cnut. Obverse: CNVT REX with a cross and crosslet. Reverse: EMBRAICE CIVITAS with a small crosslet (S987.) The third coin is a replica of a Northern Danelaw penny of Siegfried. Obverse: SIEVERT REX with cross and crosslet. Reverse: Shows EMBRAICE CIVITAS in contractions. (S980) Not all designs of Viking coins are exclusively Christian. The fourth Viking coin is made by Olaf Guthfrithsson of York. Obverse: A bird inscribed ANLAF CVNVNC (Old Norse for King Olaf.) Reverse: Shows a cross. (S1019). The bird is often identified as Odin's raven. It could also be an eagle, the symbol of John the Evangelist. The image appealed to both Christian and pagan alike. The fifth coin is a York silver penny of Eric Bloodaxe. Obverse: Displays ERIC REX in two lines with sword between. Reverse: Shows a small cross (S1030) All of these double sided historic replica coins are made of lead free pewter and are marked COPY on the reverse in compliance with the Hobby Protection Act.