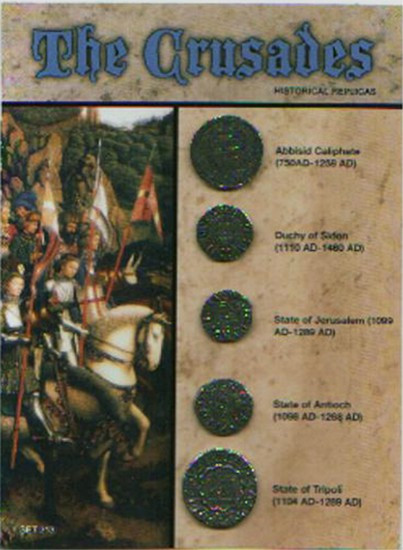 The Crusades have been described by the British historian Jonathan Riley-Smith as a "series of religiously-sanctioned military campaigns waged by much of Latin Christian Europe particularly the Franks of France and the Holy Roman Empire." Specific crusades to restore Christian control of the Holy Land were begun in 1095 A.D. However, European victories were short lived. The Crusaders were driven out of the Middle East by the end of 1291 A.D. Our Historical Replica Sets includes coins of the Muslim Abbisid Caliphate and the feudal Crusader States established during the Holy Land Crusades. The Muslim Abbisid Caliphate ruled portions of the Middle East from 750 to 1258 A.D. This replica is of a silver dirham that was minted between 786 and 809 A.D. by Harun al-Rashida, which was originally made at the Madia al Salam mint in Bagdad, Iraq. The second coin in the set is a Crusader coin of the Duchy of Sidon (1110 to 1460 A.D.) Sidon was one of the four major fiefdoms of the Kingdom of Jerusalem, one of the Crusader States. The lordship was a coastal strip on the Mediterranean Sea between Tyre and Beirut. Saladin conquered the duchy in 1187 A.D. It remained in Muslim control until 1197 A.D. Julian Grenier, titular head of Duchy sold it to the Knights Templar in the last half of the thirteenth century. This coin is a reproduction of a billion denier minted by Renaud Grenier, Duke of Sidon from 1171 to 1187 A.D. Obverse: A tower. Reverse: Arrow surrounded by two stars. Legend: SIDONI. The third coin is from the State of Jerusalem minted by Amury I (1163 to 1174 A.D.) This historical replica of a silver billion denier was originally struck between 1163 to 1174 A.D. Obverse: Legend- DE IERVASLEM. A picture of the Church of the Holy Sepulcher. Reverse: Legend: AMALRICVS REX with a single annulet in legend, cross pattee with annulets in second and third quarter. The Fourth coin is from the State of Antioch. Behemond III who was the ruler of the Crusader State of Antioch from 1149 to 1163 A.D. Silver denier. Obverse: Legend BOHANVHDVS. Helmeted head of Behemond facing left, in field, chain mail shaped as crescents. Reverse: Pattee crescent in second angle, three pellets in legend. The fifth coin is from the State of Tripoli. Behemund VII was the ruler of the Crusader State of Tripoli from 1275 to 1287 A.D. This is a replica of a silver gros grand. Obverse: Castle with three towers in 12 foil. Reverse: Cross in 12 foil. These coins are two sided replicas of original pieces. Each coin is made of lead free pewter and marked COPY on the reverse in accordance with the Hobby Protection Act.