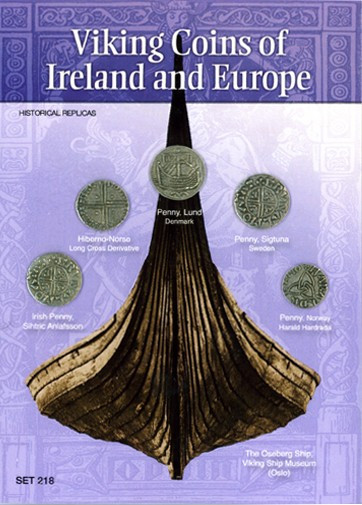 In 793 A.D. the Danes, Norwegians, and Swedes began what would become 295 years of seaborne exploration, war, commerce, trade, and even piracy, which is now known as the Viking Age. The Vikings sailed their longboats west to Iceland, Greenland, Iceland, Newfoundland, and Labrador. As mercenaries, looters, and traders the Vikings traveled east to Russia, Turkey, and Constantinople. They sailed the coasts of Germany, France, and Portugal, as well as the Mediterranean Sea finding the riches of Morocco, Italy and the Middle East. The Scandinavian Vikings settled portions of modern day Normandy; Germany; England and Ireland. Our Historical Replica Sets includes Viking coins of Ireland and Europe. In 853 A.D. the Viking leader, Olaf the White, conquered and began settlement of Ireland. Vikings introduced coinage to the Irish using the same Anglo-Saxon silver penny used in England. The cities of Dublin, Cork, Limerick and Waterford and the town of Wexford were established as major Viking trade centers. Dublin owes much of its subsequent development to its Viking founder and ruler, Sihtric. Sihtric built the city's famous Christ Church Cathedral and the basic layout of the city. This first Viking coin in this Set is a replica of an Irish silver penny minted by Sihrtic Anlafsson. Obverse: Shows a cross surrounded by Viking symbols. Reverse: Shows a portrait of Sihtric facing left holding a mace. (S6100) The second coin is a Hiberno-Norse long cross derivative silver penny imitative of the coins of Aethelred II, ruler of England; this silver penny was minted in Dublin between 1035 to 1060 A.D. (S6132) The earliest coins found in Denmark include foreign Islamic silver dirhams, along with forms of silver bullion. The third replica coin in this Set is an early Viking coins of Demark. This is an anonymous silver penny of Lund made in the ninth century. Obverse: Depicts a Viking long ship. Reverse: Shows a trident and sun. In 980 A.D. Olaf I assumed the Swedish crown. He ruled until 1022 A.D. Olaf unsuccessfully attempted to convert his Swedish chieftains to Christianity. The fourth coin is a silver penny of Olaf imitating the coins of the English Saxon King Aethelred II. Obverse: Shows the portrait of Olaf. Reverse: Shows a Christian cross. The last great Viking King of Norway was Harald Hardrada. In his early life he led a mercenary army in the Kievan Russia (Kiev) against the Poles. Later he moved to Constantinople and served as a head of the Varangian guard where he campaigned in North Africa, Jerusalem, and the Middle East. As a special agent and bodyguard, he served Byzantine Emperors Romanos III, Michael IV, and Michael V. In 1047 A.D. Harald Hardrada became King of Norway. The fifth coin is replica of a Norwegian silver penny of Hardrada, Obverse: Shows a triquitra-a pagan symbol of Odin, also used as a sign of the Christian Trinity. Reverse: Shows a Christian cross. In 1066 A.D. Hardrada invaded England to press a claim for the throne. At the Battle of Stamford Bridge, Hardrada was killed by Harold II, the last Anglo-Saxon King of England.