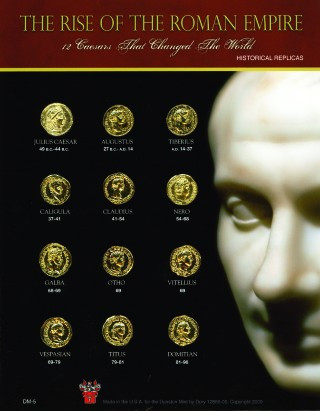 The Set of the Rise and Fall of Caesar Historical Replica Coin Set depicts the four historical events in the life and death of Julius Caesar. Each coin is a lead free pewter reproduction of an original Roman silver or gold coin. Denarius of Caesar the General (first coin) is a reproduction of a Roman Republic denarius of Julius Caesar struck in Italy in 49 B.C. These coins were struck to pay Caesar's legions. Obverse: Shows an elephant walking right trampling a serpent. CAESAR under elephant. Reverse: Shows a simpulum, sprinkler, axe, and apex (emblems of pontification) which Caesar received from the Senate. (Sear 1399) Aureus of Caesar the Victor Over Gaul (second coin) is a replica of a Roman Republican gold aureus coin of Julius Caesar struck in 48 B.C. in Greece to celebrate Caesar's conquest of Gaul. On the Reverse: Shows trophy of Gallic arms, axe on right. Inscription CAESAR under arms. Obverse: Shows a diadem head of Clementia (facing right) wreathed with oak; numeral (52) denotes age of Caesar at time of issue. (Sear 1400) Denarius of Caesar as Politician and Dictator for Life (third coin) is a single sided electrotype of a Roman Republican denarius of Julius Caesar. Caesar, with his power undisputed, ordered his portrait to be placed on all silver coins. The original coin was struck in Rome between February and March 44 B.C. On the Reverse: Shows wreathed head of Julius Caesar with the inscription CAESAR DIC PERPETVO (Dictator for Life). (Sear 1409) Denarius of Caesar's Assassination (fourth coin in set) is one of the most celebrated coins of ancient Rome. This denarius celebrates the tyrannicide of Julius Caesar on the Ides (15th) of March, 44 B.C. Brutus and his fellow conspirators killed Caesar in order to remove Rome of a tyrant and ensure the survival of the Republic. On the Reverse, the coin shows a pilus (liberty cap) between two daggers with the inscription EID MAR (Ides of March.) Obv. Shows the portrait of Brutus with the inscription BRUE IMP PLAET CEST. The coin was minted in western Asia Minor or Macedonia in the summer/autumn of 42 B.C. (Sear 1439) All coins conform to the Hobby Act and are marked COPY on the obverse or reverse of the coin.