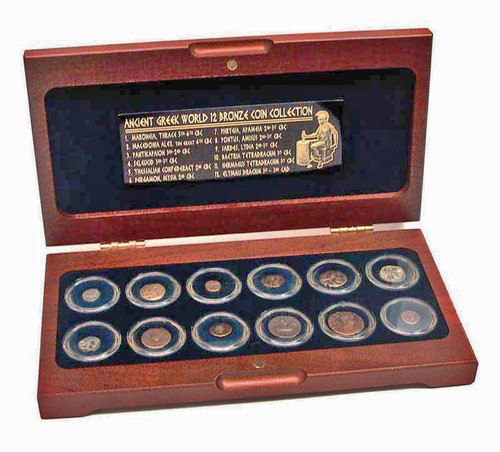 Genuine The Greek World: Box of 12 Bronze Coins from the Time of Ancient Greece  : Authentic Artifact

Twelve genuine bronze coins from the ancient Greek world, covering a period of seven centuries, and representing the kingdoms that battled the ancient Greeks and those that were occupied and "Hellenized" by the armies of Alexander the Great.

The earliest coins known are attributed to the Lydians in the 7th century B.C. By 600 B.C. the idea was adopted by the Ionian Greeks. The adoption of a coin based monetary system has been identified as a crucial factor that allowed the Greek culture to rise and flourish in the centuries following, to become the preeminent civilization in the western world. With the 4th century B.C. came the conquests of Alexander the Great, which introduced the Greek culture, language, science, and coin designs to distant regions of Europe, Africa and Asia. Centuries later, long after the Greeks departed from many of these areas, the Greek cultural influence continued to inspire and influence the artistry, denominations, and manufacture methods of the indigenous coinages. It is hard for most people to avoid an emotional response to handling ancient relics that are thousands of years old. Collecting coins over the centuries has allowed not only academics and historians, but also ordinary folks to personally own these amazing keys to history. In many cases coins are among the few pieces of evidence we have of ancient civilizations and cultures that have seemingly evaporated from the historical record. Even today, with all the technology we posses to study the past, important historical discoveries are still being made by studying ancient coins that have survived the ravages of the centuries. This impressive collection includes 12 genuine, rare, bronze coins from the Ancient Greek world. The coins span over 7 centuries representing the dynasties that battled the Ancient Greeks and those that were occupied and "Hellenized" by the armies of Alexander the Great and his generals. Each coin is protected in an archival capsule and beautifully displayed in a deluxe custom-made cherry hardwood case. The case features a rich, forest green velour-like interior and an engraved plaque inscribed with a list of the coins. The deluxe case and a certificate of authenticity come packaged in an attractive black embossed gift box.