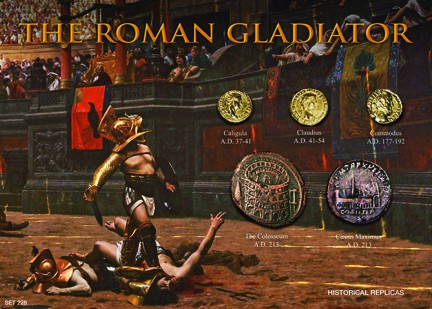 For seven centuries Rome celebrated the aggressive martial legacy of the Roman Gladiator. The gladiator was an armed fighter who entertained crowds in the Roman Republic and the Roman Empire. The word 'gladiator' comes from the Latin word for swordsman. The gladiator's sword was called a gladius. The Roman gladiatorial games publicly memorialized the art of 'dying well' throughout the Republic and Empire. Gladiatorial games were held between gladiators, wild animals, and condemned criminals. Our Historical Replica Sets shows coins famous Roman Emperors-gladiators and famous places where gladiatorial games were performed. Even Roman emperors performed in the gladiatorial arenas, though with minimum risk. They included Caligula, Claudius, Caligula, Caracalla, and Commodus. Three gold coins of emperor gladiators are include in this set. A gold aureus of Caligula, struck in Lugubrious in 37 B.C. (Sear 1813), an aureus of Claudius struck in Lugnumum I 51 A.D. (Sear 1885), and a gold aureus of Commodus struck in Rome in 192 A.D. (Sear 5604). There were Two hundred thirty amphitheaters and 60 circuses built for gladiatorial games during the Roman Republic and Empire. Two Roman coins show pictures of two gladiatorial game venues. First is a sestertius of the great Amphitheater Flavium or Roman Colosseum. Emperor Vespasian began construction in 64 A.D. The Colosseum was inaugurated in 80AD by the Emperor Titus as a gift to the Roman people. The building seated 50,000 people. This coin reverse shows the Colosseum with part of interior, gangways, arch, and obelisk. The obverse shows gladiator-emperor Titus seated left on a chair. Struck in Rome in 80 A.D. (Sear 2536). Rome's Circus Maximus held gladiatorial games, chariot races, and reenactments of naval battles. The sesterius reverse shows the Circus from the Forum Boarium. The obverse shows the emperor-gladiator Caracalla facing right. Struck in Rome in 213 A.D. (Sear 6929). Each double sided coin in this Set is stamped COPY on the reverse in accordance with the Hobby Protection Act.