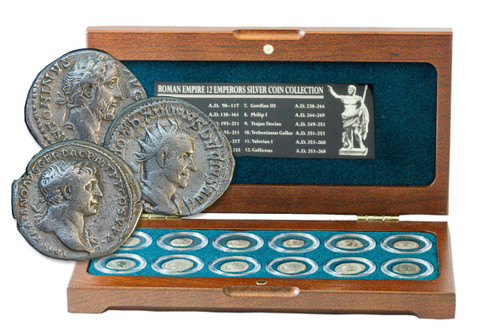 These genuine silver coins from the second and third centuries CE offer a view of the roots of modern Western civilization evident in the Roman Empire.

The obverse side of each coin shows the portrait of the emperor at the time of mintage; on the reverse sides, images depict history, mythology, and military themes. Numerous pagan gods and goddesses dominated Roman life and were reflected in the popularity of these themes.

Coins were made by hand by inserting a hot metal blank between two dies and striking the upper die with a heavy hammer. Because of this crude process, the coins are not perfectly round. The earlier coins in this collection are known as denarii. The denarius, first minted circa 211 BCE, was the central unit of currency for over 400 years. The coin design changed little over the centuries until it was eventually replaced by the larger, but lower grade, double denarius (antoninianus) circa 211 CE. The older denarii disappeared from circulation as inflation and a shortage of precious metals gradually caused a steady decline in the silver content of the the antoninianus over the next four decades. By late in the reign of Gallienus, in the middle of the third century, all that was left of the antoninianus was a diminished bronze coin with a thin silver wash. Despite some efforts to revive the “ant”, however, Roman silver coins never recovered prominence, reflecting the empire’s declining power and wealth.

The 12 Coins are all Silver Denarius from Rome and the set includes: