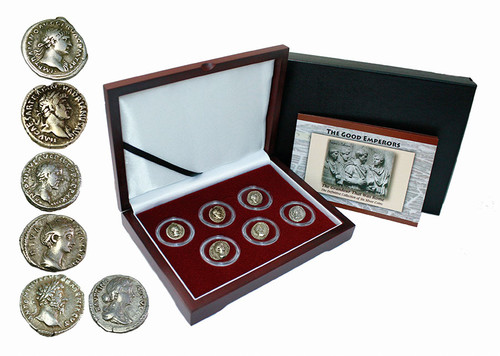 Edward Gibbon, the British historian and author of the landmark The History of the Decline and Fall of
the Roman Empire, wrote, “If a man were called upon to fix that period in the history of the world during
which the condition of the human race was most happy and prosperous, he would, without hesitation,
name that which elapsed from the deaths of Domitian to the accession of Commodus,” at which point the
Empire began its slow and ineluctable decline. In that 75 year period, Rome comprised what was arguably
the greatest civilization the world would ever know. Almost two full millennia later, Roman influence is
still felt in the Western world in everything from place names (Britain, Provence, Naples) to regnal titles
(czar is Russian for Caesar) to languages derived from Latin (the Romance languages: French, Italian,
Spanish, etc.). This was the period that made Rome great.

The reign of Trajan, 98-117 CE, marks the zenith of Roman civilization. The borders were never as vast,
the economy never as booming, the culture never as high. In an era of almost constant warfare, plague,
and famine, it was a season of relative peace and prosperity within the empire’s borders. And those
borders were indeed vast, encompassing most of Britannia, all of Gaul and Iberia, Eastern Europe to the
Danube, all of Northern Africa, Greece, Anatolia, Mesopotamia, Palestine, and the Crimea. The historian
Simon Sebag Montefiore writes, “Trajan, tall, athletic, stern, was the ideal emperor, perhaps the greatest
since Augustus.”

Born in Spain in 76 CE, Hadrian ascended to the throne upon the death of his adoptive father Trajan in
117. Part military man, part philosopher-king, the new emperor toured the length and breadth of his
empire, establishing order, drilling troops, and engaging in battle, famously crushing a Jewish revolt in
Palestine in 130. A devotee of ancient Greece, he pushed for Athens to be the cultural capital

All coins in each set are protected in an archival capsule and beautifully displayed in a mahogany-like box.
The box set is accompanied with a story card, certificate of authenticity, and a black gift box.
Empire, constructing many opulent buildings there. In Rome, he re-built the famed Pantheon, with its distinctively
Hellenistic look, and in Britain, the remains of Hadrian’s Wall are still a tourist attraction.

Hadrian’s adopted son and heir, Antoninus Pius was notable for one reason: his pacifism. Emperors of
Rome tended to be brutal individuals, drawn from the ranks of the imperial army, and quick to take up
arms. It was said of Antoninus that, not only did he never command an army in his 23 years on the
throne, but he never so much as inspected a garrison. He build the Antonine Wall, north of Hadrian’s
Wall, to keep out the Picts.

Faustina the Elder was of noble blood; Trajan was her great-great-great uncle. Her marriage to
Antoninus Pius helped legitimize his claim to the throne—one of many examples of Rome’s matrilineal
lines of succession. Their marriage was a happy one, especially by standards of royal families. When she
died in 140 at the age of 40, the devastated Emperor ordered her deified; hence the inscription DIVA
FAVSTINA on the coins made in her honor (diva means divine).

His wife was Faustina the Elder; their daughter, Faustina the Younger, married his heir, Marcus
Aurelius. Thus, while the emperors themselves were men, the line of succession was matrilineal. Indeed,
when Marcus Aurelius was confronted with his wife’s infidelity and told to divorce her, he refused,
remarking that, “If I did, I’d have to return my dowry—the Empire!”

Marcus Aurelius was probably the most brilliant ruler the Western world has ever produced. His natural
genius was cultivated at a young age by the emperor Hadrian, who ensured that the boy was give the best
education possible. He studied Latin and Greek, and was especially drawn to philosophy; his Meditations
are still regarded as masterpieces in Stoic reasoning. He also served as consul to Antoninus Pius, and was
himself an able and just Emperor. His aim was to expand the Empire north of the Danube. He spent years
fighting the Marcomanni in what is today Hungary. This ambition was thwarted by an actus Dei—the
Antonine Plague, thought to be smallpox, which wiped out a third of the population of the country and
devastated his army.

This collection contains silver coins of the four Good Emperors, as well as the two Faustinas. Portrait and
legend are on the obverse; reverses vary, but tend to feature religious or military themes. The economic
health of the Empire is evident in the silver fineness of these coins.