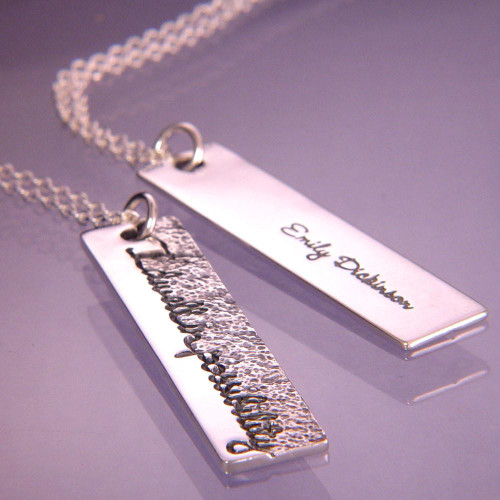 Now considered one of the great American poets of the 19th century, Emily Dickinson published few works during her lifetime. It was not until the mid 20th century that her collected writings were published and her reputation was established. From one of her many poems we selected this line to engrave in flowing script across an imaginary landscape, an apt tribute to the boundlessness of the imagination. The first stanza of the poem reads: 'I dwell in Possibility- / A fairer House than Prose- / More numerous of Windows- / Superior- for Doors-'

Emily Dickinson: "I dwell in possibility," a quotation that reminds us of the possibility that anything can happen. Sterling Silver, 1 5/8" long x 3/8" wide, Chain length: 18"