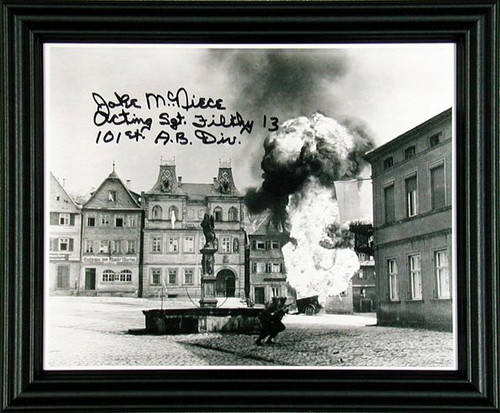 Primarily products of the Dustbowl and the Depression, the Dirty Dozen and then the Filthy Thirteen grew notorious, especially within the ranks of the elite 101st. Never ones to salute an officer, or take a bath, this squad became acclaimed within the Screaming Eagles for its hard drinking and savage fighting skill - and that was only in training. Throughout the war, however, the heart and soul of the Filthy 13 remained a survivor named Jake McNiece, the toughest man in the squad and the one who formed its character. McNiece made four combat jumps and was in the forefront of every fight in northern Europe, yet somehow never made the rank of PFC. Black & white 8x10" photo of members of the 101st Airborne Division's Screaming Eagles as they dash past a blazing gasoline trailer while under enemy fire in Kronach, Germany. Arrives framed with story card and certificate of authenticity.