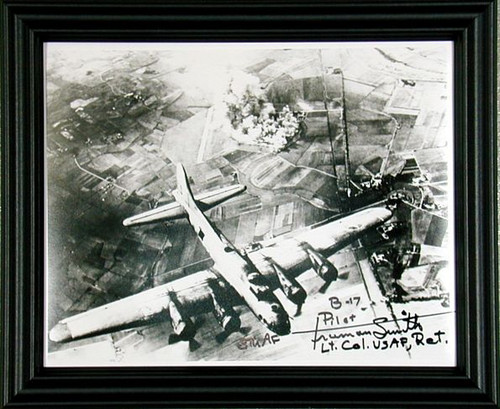 The casualties suffered by the 8th Air Force in World War II exceeded those of the US Marine Corps and the US Navy combined. Over 30,000 airmen were killed or missing and another 30,000 made POWs. The losses to say the least were extraordinary. Unbelievably, between April 8th, and July 28th 1944, Truman Smith would fly 35 successful missions over Germany, France, and Poland while piloting "Barbara B", "Pride of the Yankees", and other B-17 Flying Fortresses all before the ripe old age of 21. For his actions Truman Smith was awarded numerous Awards and Decorations to include the Distinguished Flying Cross for heroism in aerial flight. Black and white 8x10" photo of a B-17 bombing the Focke Wulf plant at Marienburg, Germany has been personally autographed by Lt. Col. Truman Smith. Arrives framed with story card and certificate of authenticity.