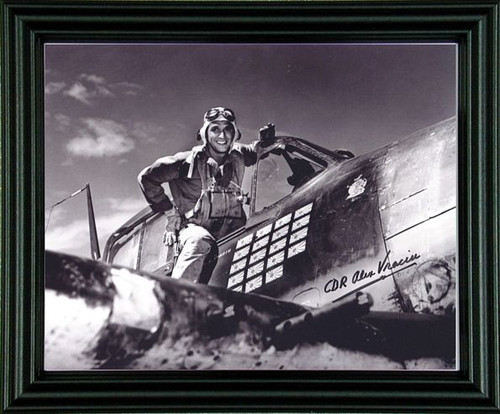 Few American pilots have had as exciting career as United States Navy Ace Commander Alex Vraciu. Upon earning his wings in August 1942, he was assigned to fly the F6F Hellcat off carriers. Cdr. Vraciu is the highest living American Fighter Ace with 19 confirmed air kills and 21 planes destroyed on the ground. Cdr. Vraciu survived service on 6 different aircraft carriers during WWII, 2 of which were torpedoed. After ditching his F6F Hellcat in the Philippines, he found himself in charge of 180 Guerillas dodging the Japanese to meet up with McArthur's advancing invasion. In addition to the Navy Cross, Cdr. Vraciu has received the Distinguished Flying Cross with two Gold Stars, and the Air Medal with three Gold Stars. Arrives framed with story card and certificate of authenticity.