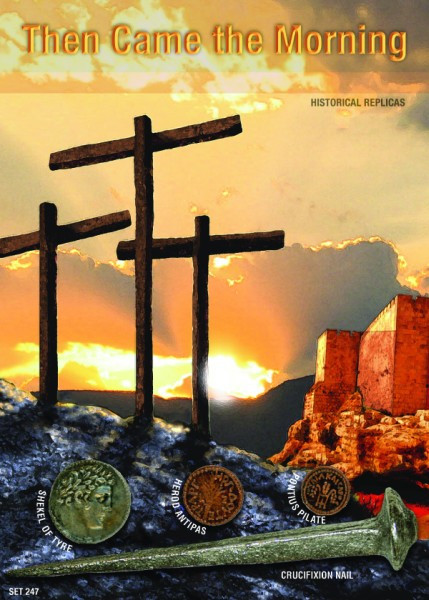 Our Historical Replica Sets displays replica coins and artifact used during the time of Jesus of Nazareth. Pontius Pilate (26 C.E to 36 C.E.) Prefect under Tiberius and Procurator of Judea Jesus was delivered to Ponitus Pilate, the governor of Judea (Matthew 27:2). The prutah of Pilate on the obverse shows a simpulum or ladle inscribed of Tiberius Caesar. The coin reverse shows three ears of barley with the outer two drooping with the inscription money of Julia Caesar, wife of Tiberius. (Hendin, 648) Herod Antipas (4 B.C.E. to 40 C.E.) Tetrarch under Tiberius Herod the Great willed his son, Antipas, the territories of Galilee and Perea, which was the Jewish portion of the Trans-Jordan. Antipas received the title of Tetrarch which was confirmed by Emperor Augustus. Antipas, who was called Herod in the New Testament ordered the execution of John the Baptist. Pontius Pilate sent Jesus to Herod when the Roman prefect learned Jesus was a Galilean (Luke 23:7-15). This coin was struck in Herod's capital of Tiberias, named to win the Roman Emperor's favor. Obverse shows a reed upright with date with inscription of Herod the Tetrarch. Reverse shows inscription Tiberius surrounded by wreath. (Hendin, 520). Shekel of Tyre (126 B.C.E to 70 C.E.) (30 Pieces of Silver) When those of the Jewish faith came to the Jerusalem Temple to pay the annual Temple tax, the high priests required the exchange of coins of other nations into the pure silver coins of Tyre, thus the numerous referenced to the use of money changers outside of the Temple. After the reign of Augustus, Herod minted high quality Tyrian shekels for the Temple in Jerusalem. Matthew 26:14-15 says Judas received 30 pieces of silver for delivering Jesus to the chief priests. The obverse of the Tyre Shekel shows the laureate head of Melquarth, a Tyrian adaptation of Hercules. The reverse side shows the Tyrian eagle standing left with its right foot on the prow of a ship and a palm branch over the left shoulder, with the inscription of Tyre the holy and inviolable. (Hendin, 917). Roman Nail The included nail is a replica of the roman nails used during the time of Jesus. Despite the fact that the ancient Jewish historian Josephus, as well as other sources, refer to the crucifixion of thousands of people by the Romans, there is only a single archaeological discovery of a crucified body dating back to the Roman Empire around the time of Jesus. The only reason these archaeological remains were preserved is because family members gave this particular individual a customary burial. These remains were found accidentally in 1968 in an ossuary with the crucified mans name on it, 'Yehohanan, the son of Hagakol'. Profesoor Nicu Haas, an anthropologist at the Hebrew University Medical School in Jerusalem, examined the ossuary and discovered that it contained a heel bone with a nail driven through its side, indicating crucifixion. The point of the nail had olive wood fragments on it indicating that he was crucified on a cross made of olive wood or on an olive tree. Additionally, a piece of acacia wood was located between the bones and the head of the nail, presumably to keep the condemned from freeing his foot by sliding it over the nail. It is thought that, since during Roman times iron was expensive, the nails were removed from the dead body and recycled to cut the costs, which would help to explain why only one has been found. The tip of that nail was bent in such a way that it couldn't be removed, possibly from hitting a knot in the wood. All coins in this Set are marked COPY on the reverse in accordance with the Hobby Protection Act.