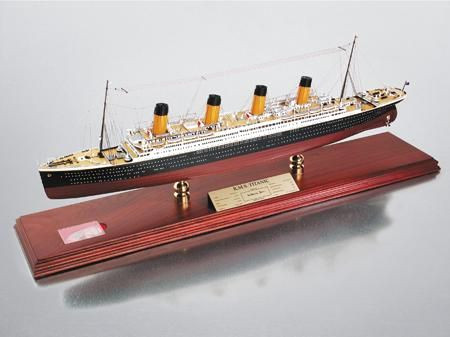 Our specialized model ships are uniquely designed and manufactured using the latest innovations and techniques applied in the over-all manufacturing and operation procedures. Only high-quality grade and premium materials are used by our renowned master craftsmen and accomplished team. This ensures that each RMS Titanic model ship is precisely based on the exact blueprint of the original Titanic model vessel.

Its parts including the weaponries, armament, guns and hulls are extremely accurate and precise like the original model of the Titanic. This ship model will fascinate anyone who gazes at it for its remarkable and exceptional quality. Titanic models also come with an extremely durable base stand engraved with the ship';s official insignia.

RMS Titanic is one of the most famous historical ships. Titanic was the biggest moving object ever build. She was not only biggest but also backed with superior quality and performance. Titanic was the property of White Star Corporation, based in Britain.

The RMS (Royal Mail Ship) Titanic, an Olympic class passenger liner, was a British luxury passenger liner that sank on April 15, 1912, en route to New York from Southampton, England, on its maiden voyage. The largest and most luxurious ship afloat, it had a double-bottomed hull divided into 16 watertight compartments. The Titanic struck an iceberg on the night of April 14, at 11:40 PM. Titanic sank, with great loss of life, at 2:20 AM, on April 15, 1912. The United States Senate investigation reported that 1,517 people perished in the accident, while the British investigation has the number at 1,490. Regardless, the disaster ranks as one of the worst peacetime maritime disasters in history, and is by far the best known. It carried some of the richest, most powerful industrialists, multi-millionaire entrepreneurs of her day.

This model is personally signed by survivor Millvina Dean. Dean was the last remaining survivor of the sinking of the Titanic and at 2 months and 27 days of age, she was also the youngest passenger on board the ship. Dean';s father would perish when the great ship went down; but she, her brother, and their mother would survive on Lifeboat 10. The three surviving members of the Dean family went on to live long healthy lives; Dean';s mother passed away at age 96, her brother passed at age 80, and Millvina, passed away on May 31, 2009 at the age of 97.

Engraved with the ship';s official insignia