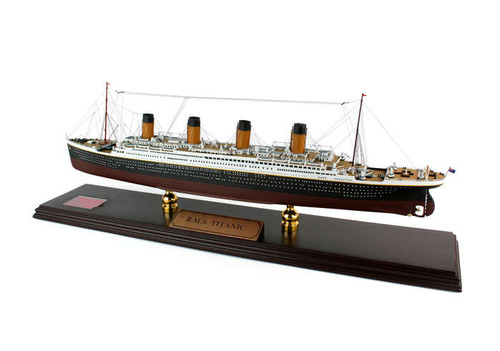 Our premium high quality air & space museum replicas and naval models are handcrafted from mahogany and comes with a wooden stand. Length is 30 1/4 and beam is 3 1/4"

The RMS Titanic was a passengar liner that struck an iceberg on her maiden voyage from Southhampton England to New York City and sank on April 15 1912. On the night of April 141912 the ship made its fatal collision at an estimated 37 seconds after the Fleet sighted the iceberg. The iceberg scraped the ship's starboard (right) side buckling the hull in several places and popping out rivets below the waterline over a length of 299 feet (90m). This opened the first six compartments to the sea; the ship was only designed to remain afloat with just the first four compartments flooded. The entire impact lasted approximately 10 seconds. Additionally about 130 minutes after the collision water started pouring from the sixth into the seventh compartment over the top of the bulkhead seperating them. Following an inspection by the senior officers the Titanic's shipbuilder Thomas Andrews concluded that the Titanic would sink. The lifeboats were ordered to be readied and a distress call was sent out. As there are not enough life boats for all passengers of a total of 2224 people aboard the Titanic only 710 less that a third survived and 1514 perished.

Construction of the RMS Titanic funded by the American J.P. Morgan and his International Mercantile Marine Co. began on March 311909 at the Harland and Wolff shipyard in Belfast UK. Titanic's hull was launched at 12:13 on May 311911 and her outfitting was completed by March 311912. The designers were Lord Pirrie a director of both Harland and Wolff and White Star naval architect Thomas Andrews Harland and Wolff's construction manager and head of their design department and the Right Honorable Alexander Carlisle the shipyard's chief draughtsman and general manager.

The Titanic's design and construction featured luxury and opulence. There was a telephone system a lending library and a large barber shop on the ship. The First-Class section has a swimming pool a gymnasium squash court turkish bath Electric bath and a Verandah Cafe. First-Class common rooms were adorned with ornate wood panelling expensive furniture and other decorations while the third class general room had pine panelling and srurdy teak furniture. The Caf"