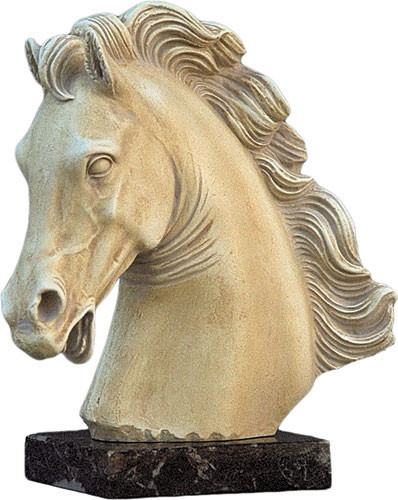 Horses were an integral part of life in ancient Greece. They played an active role in warfare, transportation and in the games such as the Panathenaic Games in Athens with its huge contingent of cavalry riders. Athenian enthusiasm for the horse was clearly expressed in the many civic buildings and temples that were adorned with paintings and sculptures of riders and battle scenes showing cavalry such as in the Parthenon friezes where this wonderful horse head originates. Two deities, Poseidon and Athena, together served as protectors of horses and patrons of horsemanship and equestrian activities. Athena, Patron Goddess of Athens, was credited with the invention of the bridle and the use of chariots. The horse was a symbol of prestige, wealth and status. Social rank has often been defined by the ability to own and maintain a horse. The Aristocratic families that ruled Athens during the 6th century B.C. often took pride in their nobility by starting or ending their name with the word hippos (horse). The aristocracy bred and raced horses from very early times and it seems that chariot racing was the preferred form of competition and maybe the foundation of the Olympic Games

8"H, Statue on marble base