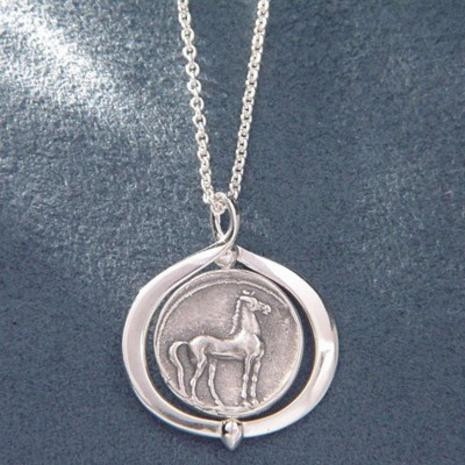 Greek Horse Coins from original coins in the Walters Art Gallery, Baltimore Maryland This necklace brings together images of the horse from two coins of the classical world. One side is from a stater from Carthage, a coin made of gold or electrum and designed in the Greek style. It was struck between 340 and 242 BC and bears the small fine-headed horse which was typical of those portrayed in Greek and Etruscan art as no heavy draught horse was developed in antiquity. The horse remained a rich man's possession used for war, sport and travel but not for agriculture. The obverse of the coin bore an image of Persephone, the consort of Hades, God of the Underworld. The second side is from a gold coin in circulation in Macedonia from 359 to 336 BC during the reign of Philip of Macedon, the father of Alexander the Great. It depicts a two horse chariot or biga led by the tiny winged figure of Victory carrying a laurel wreath. Below is the name of Philip in Greek letters. The obverse of the coin bore an image of Apollo, God of the Arts, Order and Harmony.