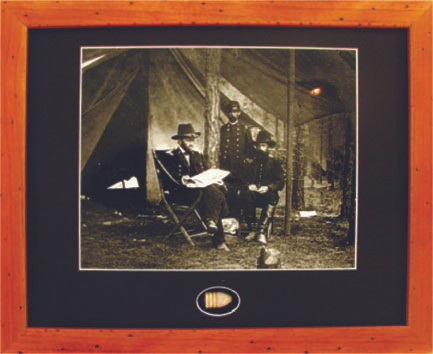 Grant in camp - with Artifact, Relic

After the American Civil War began in April 1861, Ulysses S. Grant joined the Union war effort, taking charge of training new regiments and then engaging the Confederacy near Cairo, Illinois. In 1862, he fought a series of major battles and captured a Confederate army, earning a reputation as an aggressive general. This photo was taken during the Civil war of Grant in his camp. Each photo is matted to include an actual Union bullet recovered near a Civil War battlefield. Certificate of Authenticity included.