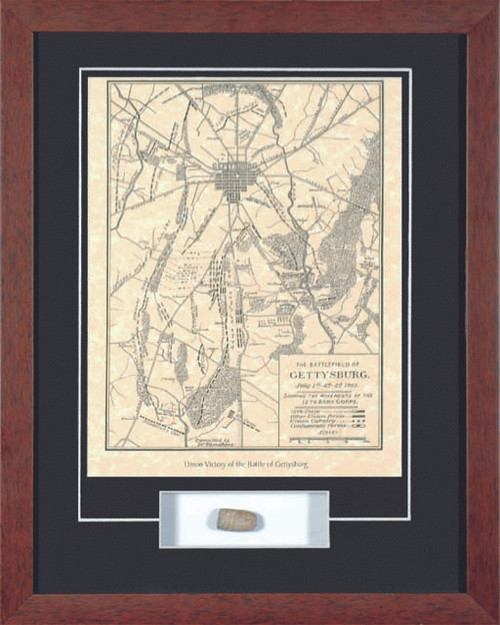 The Battle of Gettysburg (July 1-July 3, 1863), was fought in and around the town of Gettysburg, Pennsylvania as part of the Gettysburg Campaign. This was the battle with the largest number of casualties in the American Civil War and is frequently cited as the wars turning point. Union Major General George Gordon Meades Army of the Potomac defeated attacks by Confederate General Robert E. Lees Army of Northern Virginia, ending Lees invasion of the North. Between 46,000 and 51,000 Americans from both armies were casualties in the three-day battle. That November, President Lincoln used the dedication ceremony for the Gettysburg National Cemetery to honor the fallen Union soldiers and redefine the purpose of the war in his historic Gettysburg Address. This map of the Battle of Gettysburg is matted to include authentic Civil War Union bullet. Certificate of Authenticity included.