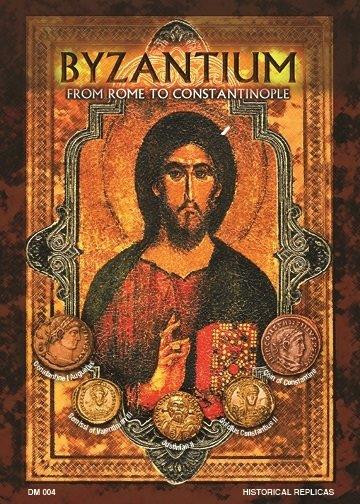 Coins of the Byzantine Empire, with Medallion of Constantine I - Replica Coins

The first Roman Emperor who adopted Christianity, Constantine the Great, built an expansive new Roman capital in the eastern part of the Empire. In 330 A.D. Constantinople became the administrative center of the Empire. Within two hundred years, Constantinople rose as a center of Christianity and the major Byzantine city of the Byzantine Empire. Byzantium may be defined as a multi-ethnic empire that emerged as a Christian empire, soon comprised the Hellenized empire of the East and ended its thousand year history in 1453 A.D. as a Greek Orthodox state. An empire that became a nation by the modern meaning of the word. Historians have defined the Middle Ages as beginning with the fall of Rome in 476 A.D. and ending at the beginning of the sixteenth century.

Our Historical Replica Sets includes two sided reproductions of five Byzantine coins. The first replica is a medallion of Constantine I, the first Christian Roman Emperor. The second coin shows the personification of the Sun holding the globe. The third and the fourth coins (Constantine II and Valentinian III) show new coin styles. At the end of the 7th century Justinian II issued the first real portrait of Jesus Christ on the coin - the fifth coin in this collection. The originals of these coins were struck during the thousand year history of the Byzantine Empire. These are replicas of original pieces. All coins are marked COPY on the reverse in accordance with the Hobby Protection Act.

Replica coins on 5 x 7 Display Card, In Protective Sleeve and Suitable for Framing. Made in the USA