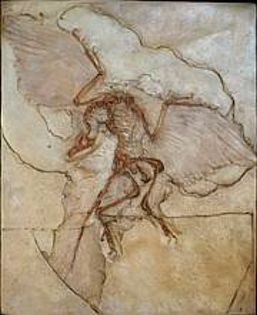 Archaeopteryx is well known as "the first bird." Having both dinosaurian and avian features, Archaeopteryx seems to represent a "missing link" between dinosaurs and birds. It is so similar in structure to theropod dinosaurs that some specimens had been mistaken for the small dinosaur Compsognathus. Unlike modern birds, Archaeopteryx had teeth, a bony tail, and claws on its forelimbs, but like birds, it had flight feathers and hollow bones.Since its discovery in 1861, Archaeopteryx has been shrouded in controversy. Many questions still remain unanswered. Was Archaeopteryx really an intermediate form between birds and dinosaurs? Why did its wings evolve? Could it take off from the ground or did it have to launch itself from tree branches? Was it a flyer, a glider, or could it fly at all? A handful of scientists even believed that Archaeopteryx was a cleverly crafted hoax created to add support to Darwin';s On Origin of Species, published in 1859. All the controversy of Archaeopteryx is part of what makes it so fascinating.

This Archaeopteryx, the "Berlin specimen" found in 1877, was the second complete Archaeopteryx specimen discovered. The Solnhofen beds have long been mined for their fine grained limestone which is perfect for lithographic printing. These Late Jurassic beds are also renowned for producing marine and terrestrial animal and plant fossils of exquisite preservation. During the Late Jurassic, the Bavarian region of Germany was a series of islands and coastal lagoons. Any creatures remains that were washed into one of these lagoons would lay undisturbed and unscavanged. Layers of fine marine sediment would cover the remains, leading to nearyly flawless preservation. The feathers of the Berlin Archaeopteryx are one of the best examples of such preservation. The excellent preservation, evolutionary position and controversy surrounding the Berlin Archaeopteryx make it one of the most famous and important fossils in the world.

To date, there are ten Archaeopteryx specimens, which have been identified. The Berlin Specimen is the most famous and is the one which you see in books most often. A few years ago this specimen was shipped for display at another location. It was insured for $16 million.