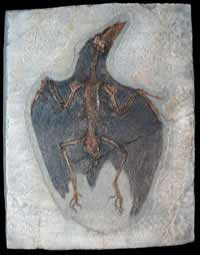 Remains of Confuciusornis are found at an Early Cretacaeous fossil site known as Sihetun in the Liaoning Province of northeastern China. About 125 million years ago, Sihetun was an ancient freshwater lake that supported many fish, invertebrates, mammals, dinosaurs, and primitive birds. A nearby volcano blast killed and buried the inhabitants of the lake in a 4,800 foot thick layer of claystone. The fine grain of the claystone and the rapid burial of the animals there allowed exceptional preservation of the soft parts of these animals such as internal organs and feathers.

By studying the well preserved remains of Confuciusornis specimens from Sihuten, much can be determined about its lifestyle and adaptations. Confuciusornis seems to have been an apt flyer, having well developed flight feathers and hollow bones as a weight-saving feature. Unlike most modern birds Confuciusornis retained clawed fingers on its wings. The feet, with strong recurved claws seem to have been adapted for perching. Because hundreds of specimens have been found at Sihuten, it is assumed that Confuciusornis colonized along the lake, perhaps for nesting or mating. Because of its evolutionary significance and exceptional preservation, Confuciusornis is a highly significant fossil. The specimen represented here is a female. Males had long tail feathers, similar to today';s Central American Quetzal.

The original specimen, from which this cast was made, sold for $20,000.00. The preparator of the specimen nicknamed the piece "Darth Vader" due to the dark feather area of the matrix.