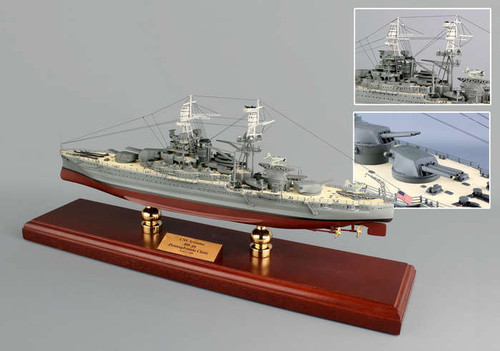 NEW, LOWER PRICE!! Our premium high quality air & space museum replicas and naval models are handcrafted from mahogany and comes with a wooden base. Dimensions are 20.25(L) X 3.75"(Beam).

USS Arizona was a Pennsylvania-class battleship built for and by the United States Navy in the mid-1910s. Named in honor of the 48th state's recent admission into the union the ship was the second and last of the Pennsylvania class of "super-dreadnought" battleships. Although commissioned in 1916 the ship remained stateside during World War I. Shortly after the end of the war Arizona was one of a number of American ships that briefly escorted President Woodrow Wilson to the Paris Peace Conference. The ship was sent to Turkey in 1919 at the beginning of the Greco-Turkish War to represent American interests for several months. Several years later she was transferred to the Pacific Fleet and remained there for the rest of her career.

Aside from a comprehensive modernization in 1929"