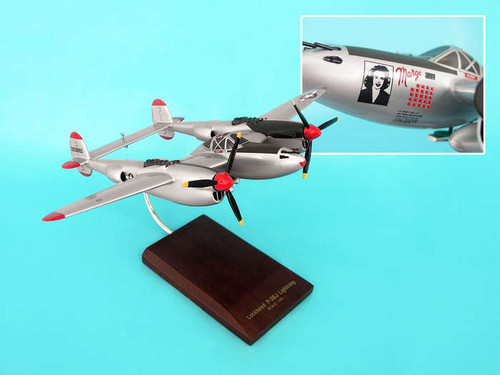 Our premium high quality air & space museum replicas and naval models are crafted from mahogany and comes with a wooden base. Dimensions are 11-1/4(L) X 15-5/8"(Wingspan).

The Lockheed P-38 Lightning was a World War II American fighter aircraft built by Lockheed. Developed to a United States Army Air Corps requirement the P-38 had distinctive twin booms and a single central nacelle containing the cockpit and armament. Named "fork-tailed devil" by the Luftwaffe and "two planes one pilot" by the Japanese the P-38 was used in a number of roles including dive bombing level bombing ground-attack photo reconnaissance missions and extensively as a long-range escort fighter when equipped with drop tanks under its wings.