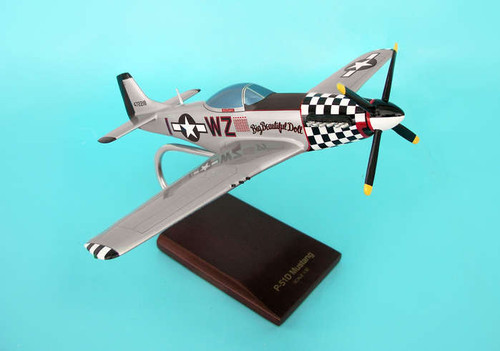 Our premium high quality air & space museum replicas and naval models are handcrafted from mahogany and comes with a wooden base. Dimensions are 12 1/4(L) X 15"(Wingspan).

It was conceived designed and built by North American Aviation (NAA) under the direction of lead engineer Edgar Schmued in response to a specification issued directly to NAA by the British Purchasing Commission; the prototype NA-73X airframe was rolled out on 9 September 1940 albeit without an engine 102 days after the contract was signed and it was first flown on 26 October.[3] The Mustang was originally designed to use a low-altitude rated Allison V-1710 engine and was first flown operationally by the Royal Air Force (RAF) as a tactical-reconnaissance aircraft and fighter-bomber. The definitive version the P-51D was powered by the Packard V-1650-7 a licence-built version of the Rolls-Royce Merlin 60 series two-stage two-speed supercharged engine and armed with six .50 caliber (12.7 mm) M2 Browning machine guns.