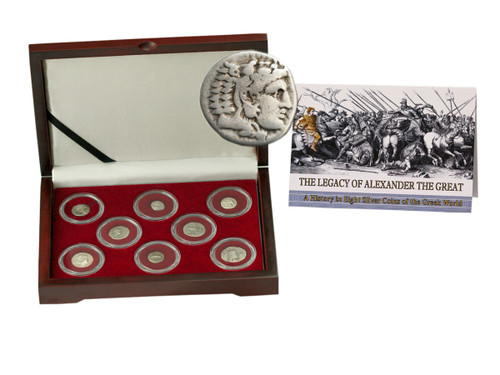 Genuine The Legacy of Alexander the Great: A History in 8 Silver Coins of the Greek World Box  : Authentic Artifact

This remarkable collection of eight silver coins features a drachm struck by Alexander the Great, as well as issues from successor kings and subsequent
mintages influenced by his iconic design.

Alexander the Great is widely considered the greatest general of all time. At age twenty he emerged from a small kingdom in Macedonia to conquer a vast empire that stretched from the Adriatic Sea in the west to India in the East, and from Egypt in the south as far north as the Black Sea—an achievement as astonishing as it was improbable. Legend has it that when he beheld the breadth of his dominions, he wept, for there were no more worlds to conquer.

But his influence extended beyond the battlefield and was perhaps most felt in the mintage of money. Coinage in the Near East was, in the fourth century BCE, extremely crude. In India, for example, money consisted of punch marks were made on misshapen lumps of silver. Alexander changed that. His coinage was struck across his vast empire. Even after his death in 323 BCE, his general design—head of a Greek god on the obverse, seated deity on the reverse along with inscriptions—was copied and adopted throughout the region, as this collection shows.

After his death in Babylon, a hallowed city he hoped to establish as his capital, Alexander-type coins continued to be issued in the two decades following his death by the Macedonian generals who divided the empire between them and created the Hellenistic kingdoms. Even as the successor kings initialed coinages in their own names and with their own types the "Alexander’s" lived on for two centuries during which time they were issued by independent cities as an international coinage.