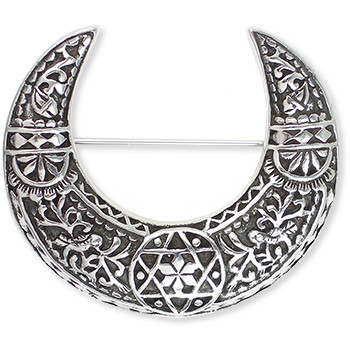 Inspired by the collections of the Israel Museum, Jerusalem

The original pin from Tunisia was cast in sterling silver, hammered and engraved. It is a descendent of the fibula worn by women of the ancient world to carry the entire weight of their garments. Over time, various decorations were added to these pins, and they became decorative as well as functional. The technique used in making such decorations might also indicate the wearers regional affiliation.