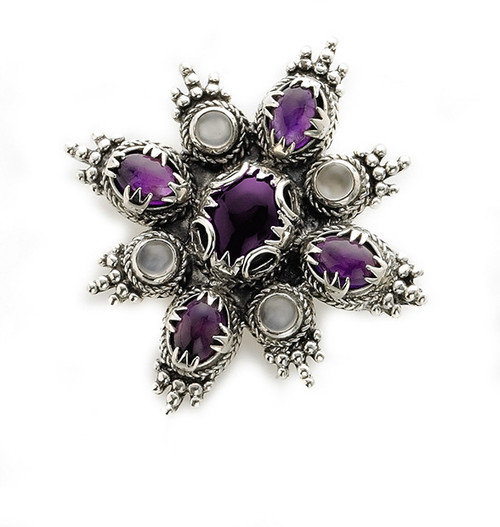 EUROPE
9th Century
From the collections of The Pierpont Morgan Library

The design of this jewelry was inspired by an ornamental boss from the binding of the Lindau Gospels. The late ninthcentury cover was made in one of the imperial workshops of Emperor Charles the Bald, grandson of Charlemagne. The location of this workshop is uncertain. Some scholars have argued for the Abbey of St. Denis, near Paris, where Charles was secular abbot from 867 until his death in 877. The Lindau Gospels was the first major medieval manuscript acquired by Pierpont Morgan. It bears the signature M.1.

Materials: bronze with silver finish, amethyst, and moonstone. Bail on the back to wear as a pendant.
Height 1 3/8", Width 1 1/2"
Gift Box included