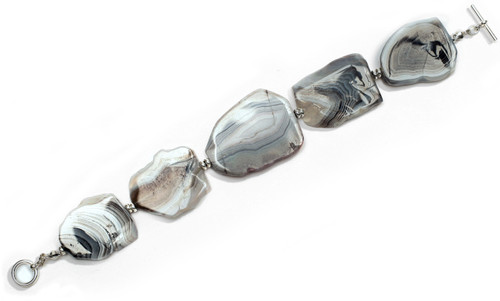 According to Theophrastus, a Greek philosopher from the 3rd century B.C. , agate was first found along the Achates River, from which the stone also derives its name. Agate exists in a variety of colors and patterns which include: banded agate- named for its distinct bands, fire agate- for its orange-red color, and moss agate-for its likeness to moss. Some banded agates were cut to look like an eye, and were worn as protective amulets
against the evil eye. These valuable talismans were often handed down to descendents, serving as protection for generations to come.