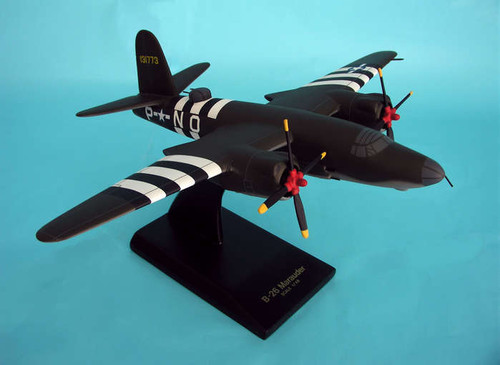 Our premium high quality air & space museum replicas and naval models are handcrafted from mahogany and comes with a wooden base. Dimensions are 13 1/4(L) X 15"(Wingspan).

The Martin B-26 Marauder was a World War II twin-engine medium bomber built by the Glenn L. Martin Company. First used in the Pacific Theater in early 1942 it was also used in the Mediterranean Theater and in Western Europe. After entering service with the U.S. Army the aircraft received the reputation of a "Widowmaker" due to the early models' high rate of accidents during takeoff and landings. The Marauder had to be flown by exact airspeeds particularly on final approach and when one engine was out. The 150 mph (241 km/h) speed on short final was intimidating to pilots who were used to much slower speeds and whenever they slowed down below what the manual stated the aircraft would stall and crash.