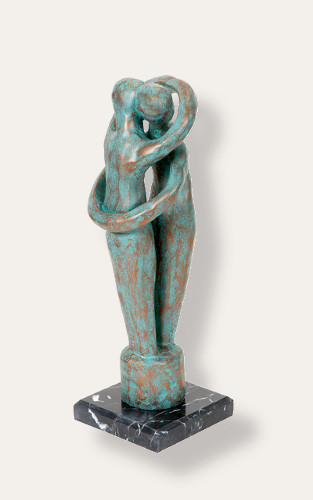 This is Lipman-Wulf's famous scupture symbolizing the commitment of marriage. Peter Lipman-Wulf was born in 1905 in Berlin, Germany, the son of a prominent lawyer and of a well-known sculptress. Success came early to Lipman-Wulf in pre-Nazi Germany, in the form of winning first prize in the Prussian State Competition and commissions for two marble fountains by the City of Berlin, all this between 1928 and 1932, or, before he was 27 years old. The intolerance of the Hitler era forced him to move to France, where he lived, taught, and worked under difficult circumstances. In 1937, he was awarded the gold medal at the Exposition Mondiale in Paris. Since 1947, Lipman-Wulf has made his home in New York. He has become an American citizen and teachers, after similar assignments in other schools, at Adelphi University, Long Island.