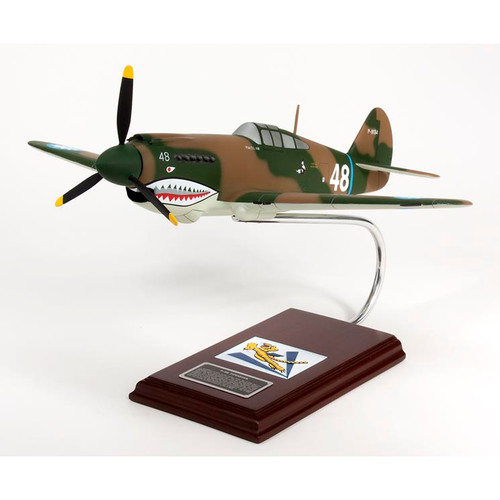 The P-40, manufactured by Curtiss-Wright Corporation, was a famous fighter/bomber aircraft which is used during the World War II. The P-40 had its first flight in 1938. The P-40B Tomahawk, a Warhawk variant, included more armor and self-sealing fuel tanks in early combat operations. Even though these improvements came at price, the P-40B Tomahawk became the best fighter the US had at the beginning of World War II. British Commonwealth Air Forces gave the name Tomahawk to models equivalent to the P-40B and P-40C. David Lee "Tex" Hill learned to fly the Curtiss P-40 in the AVG training program in Burma and did well as a fighter pilot in the 2nd Pursuit Squadron as a flight leader and then squadron commander becoming one of the top aces under the tutelage of Claire Chennault. After the AVG was replaced by the USAAF 23rd Fighter Group in July 1943, Hill remained with Chennault taking over the 75th Fighter Squadron and later becoming group commander, credited with a total of 18.25 victories.