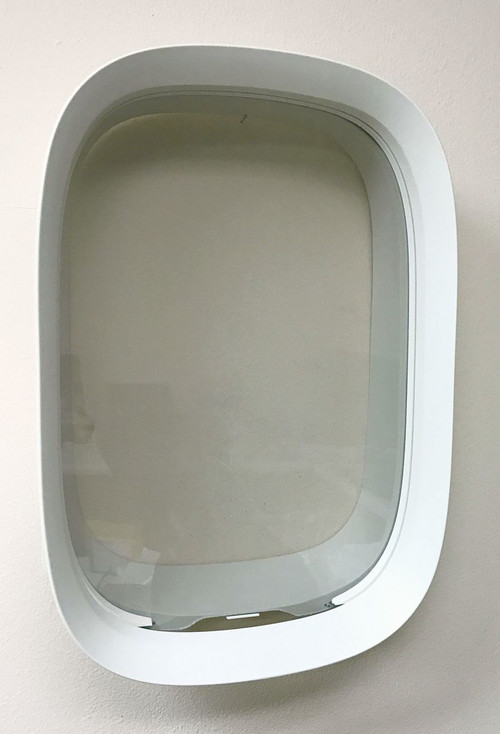 An actual window assembly from a retired Boeing 747. The 747 is a wide-body commercial jet airliner and cargo aircraft, often referred to by its original nickname, Jumbo Jet. Its distinctive "hump" upper deck along the forward part of the aircraft makes it among the world's most recognizable aircraft, and it was the first wide-body produced. First flown commercially in 1970, the 747 held the passenger capacity record for 37 years. The four-engine 747 uses a double-deck configuration for part of its length. It is available in passenger, freighter and other versions. Boeing designed the 747's hump-like upper deck to serve as a first class lounge or extra seating, and to allow the aircraft to be easily converted to a cargo carrier by removing seats and installing a front cargo door. The 747 was expected to become obsolete after 400 were sold, but it exceeded critics' expectations with production passing the 1,000 mark in 1993. By April 2017, 1,531 aircraft had been built, with 21 of the 747-8 variants remaining on order. The 747-400, the most common passenger version in service, has a high-subsonic cruise speed of Mach 0.85–0.855 (up to 570 mph or 920 km/h) with an intercontinental range of 7,260 nautical miles (8,350 mi or 13,450 km). The 747-400 passenger version can accommodate 416 passengers in a typical three-class layout, 524 passengers in a typical two-class layout, or 660 passengers in a high density one-class configuration. The newest version of the aircraft, the 747-8, is in production and received certification in 2011, with deliveries of the 747-8I passenger version began in May 2012.