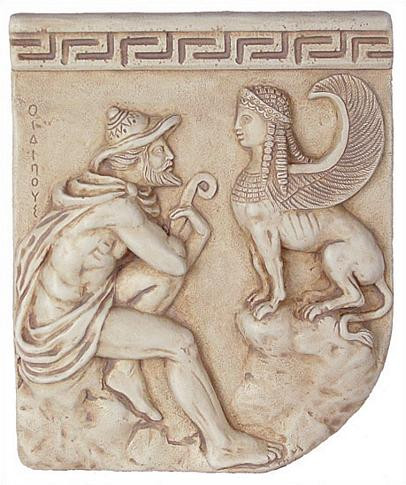 Oedipus and the Sphinx

When King Laius of Thebes learned from an oracle that he was destined to be killed by his own son, who would then marry his mother Jocasta, he decided that his newborn son could not be allowed to live. He ordered a servant to leave him to die on a lonely mountain. A passing shepherd found the infant and took him to Polybus, the king of Corinth. The queen, who had never had children of her own, was delighted that the gods had sent them a son. They named the boy Oedipus (swollen foot), and they loved him so much that they never told him he was adopted. Thus, when Oedipus heard an oracle proclaim that he would kill his own father and marry his mother, he decided to leave Corinth rather than bring harm to the parents he loved so much. As he wandered, he came to a crossroads, where a haughty man in a chariot ordered him off the road and threatened him with a whip. Oedipus, who was after all a prince, answered the man with equal arrogance. When the man tried to strike him, Oedipus pulled him from his chariot and killed him. Eventually Oedipus came to the gates of Thebes. Guarding the gates was a terrible monster with the body of a lion and the head and torso of a woman. She allowed no one to enter or leave the city without answering the riddle that she posed. If the traveler could not answer correctly, she would kill and devour him. As no one had yet come up with the right answer, the sphinx was well-fed, and the city of Thebes was effectively cut off from all trade and all contact with the world outside the city walls. When Oedipus reached the gates of the city, the creature posed her riddle: What walks on four legs in the morning, two legs at noon, and three legs in the evening? Oedipus solved the riddle, answering that man crawls on all fours in infancy, walks upright on two legs in adulthood, and uses a cane as a third leg in old age. The sphinx was so frustrated that Oedipus had answered her riddle that she threw herself from the city walls, and died. The Thebans were immensely grateful to Oedipus for having rid them of the monstrous sphinx. The gratitude of the people for their deliverance was so great that they made Oedipus their king, giving him in marriage their queen Iocaste. Oedipus, ignorant of his parentage, had already become the slayer of his father; in marrying the queen he became the husband of his mother. These horrors remained undiscovered, till at length Thebes was afflicted with famine and pestilence, and the oracle being consulted, the double crime of Oedipus came to light. Iocaste put an end to her own life, and Oedipus, seized with madness, tore out his eyes and wandered away from Thebes, dreaded and abandoned by all except his daughter Antigone. After many years of wandering, he arrived at the shrine of the Eumenides at Colonus, near Athens. There he died, after having atoned for his crimes by virtue of his years of suffering and sorrow.