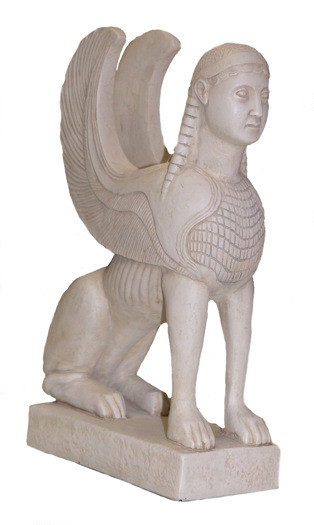 The Greek Sphinx had a woman's head, lion's body, serpent's tail and eagle's wings. Sent by Hera to punish Thebes for displeasing the Goddess, she settled on Mount Phicium, near the city and asked everyone who passed by to answer a riddle she had learned from the three Muses: "What being, with only one voice, has sometimes two fee, sometimes three, sometimes four, and is weakest when it has the most?" Anyone unable to render the correct answer was immediately slain. One day Oedipus chanced along that road and guessed the answer: "Man, because he crawls on all four as an infant, stands firmly on his two feet in his youth and leans on a staff in his old age." Completely shattered by her defeat, the Sphinx threw herself from the mountain and Oedipus was acclaimed King. The people from the island of Naxos gave this sphinx to the city of Delphi as a gift to the oracle.