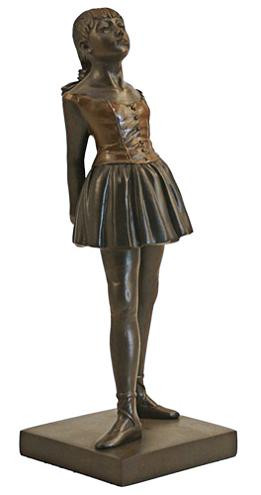 Although Degas is mainly known as a painter, sculpting was almost as important in his life. He began seriously to sculpt when he was in his early forties and, although he probably had no thought of exhibiting most of his sculpture, his modeling increasingly became a major part of his work. At the time of his death his studio contained more than one-hundred and fifty wax models which he had made of dancing girls, race horses and women working or bathing. With failing eyesight, sculpting became his principal medium of expression at the end of his career. "Everyone has talent at twenty-five. The difficulty is to have it at fifty." Edgar Degas (1834-1917.). The only sculpture exhibited by Degas in his lifetime, the wax version of the Little Dancer Ballerinas caused a furor when first exhibited in 1881 because of its stark realism as Degas was clearly using the sculpture to question accepted ideas of art. A sympathetic critic observed: "The terrible truthfulness of this statuette is a source of obvious discomfort... all their notions about sculpture, about that cold, inanimate whiteness, those memorable stereotypes replicated for centuries, are demolished. The fact is that, on first blow M. Degas has overturned the conventions of sculpture."