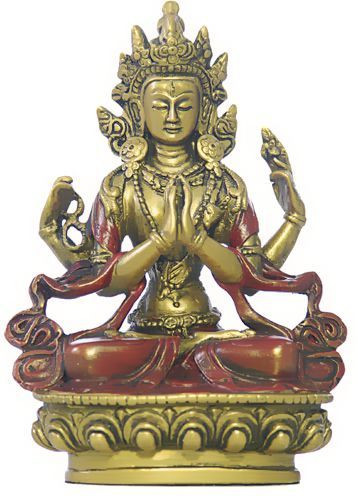 Chenrezi is a Bodhisattva (Bodhi means enlightenment and Satwa means essence). The Bodhisattva is a being that has reached Nirvana but has abstained from it in order to stay on Earth to help guide all mankind to the true path of the Buddha. Chenrezi is the personification of the six syllable mantra "om ma ni pad me hum" and hence he is literally called Shadakshari Lokeswara (Lokeswara of the six syllable). Because of the popularity of this mantra in Tibet, its embodiment as Chenrezi is also very popular. Chenrezi is usually represented seated in meditation, sumptuously attired and adorned and with four arms. The two principle hands are clasped together against his chest in the praying gesture (Namaskara mudra) holding the three jewels. The other two hands hold a rosary and a lotus. Chenrezi embodies love, kindness and compassion. He removes ignorance, purifies negative emotions and brings happiness and liberation from suffering to all sentient beings.