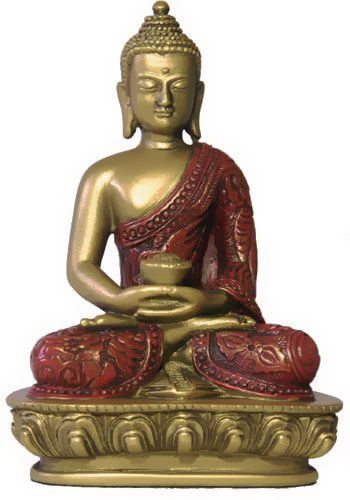 Amitabha Buddha "The Buddha of infinite Light" is a cosmic Buddha who resides in the Pure Land of the Western Heaven where all beings enjoy unbounded happiness. Amitabha Buddha is the most popular Buddha in Japan (known there as Amida) and China (known there as Amitofu). It's said that those who recite his name, particularly at the time of dying, will be reborn in the Pure Land. According to Mahayana Buddhist Sutras he was a king in a remote period of time. Renouncing his kingdom, he became a monk and was named Dharmakara (Treasury of Dharma). After observing the misery of all sentient beings, and moved by compassion he made 48 vows in which he promised not to attain enlightenment until he established the Pure Land where all could be liberated from their sufferings. He practiced for many eons until he accomplished all his vows. Amitabha is a Sanscrit word, literally meaning boundless light and boundless life. He is one of the five Dhyani Buddha of Mahayana Buddhism. Together with his two chief companions. Avaloklishwana and Maha sthamprptta, they are known as the Western Trinity. Here Buddha is represented meditation posture with the hands together in Samadhi mudra. He usually faces the west.