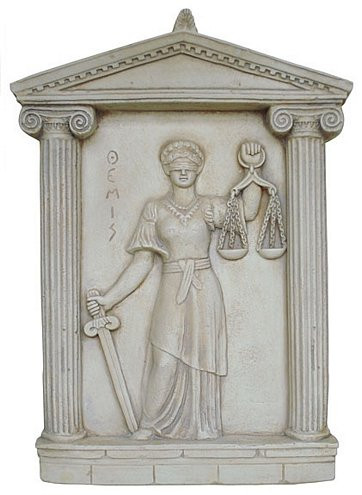 Themis was the Titan goddess of divine law and order - the traditional rules of conduct first established by the Greek gods. She was also a prophetic goddess who presided over the most ancient of the earthly oracles, including the shrine of Delphi. In this role, she was the divine voice who first instructed mankind in the primal laws of justice and morality, such as the precepts of piety, the rules of hospitality, good governance, conduct of assembly, and pious offerings to the gods. In Greek, the word themis meant divine law, rules established by custom and tradition. Unlike the word nomos, the term was never used to describe laws established by human decree. Themis was an early bride of Zeus and his prime counsellor. She was often represented seated beside his throne advising him on the precepts of divine law and the rules of fate. Themis was closely identified with Demeter in her role as the Thesmophoros (Law Bringer). Themis was also identified with Gaia (Earth) especially in the role of earthly oracle of the prophetic voice of earth itself.