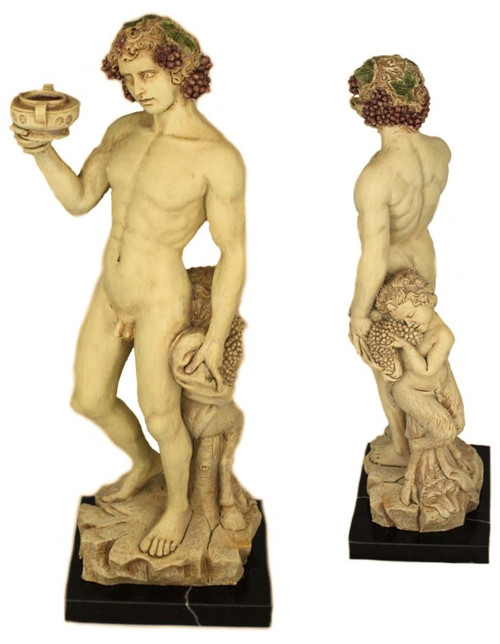 EXCLUSIVE for MUSEUM STORE COMPANY. Bacchus (1496-7) is a marble sculpture by the Italian High Renaissance sculptor, painter, architect and poet Michelangelo. The original statue which is larger than life-size, depicts Bacchus, the Roman god of wine (Dionysus in Ancient Greek), in a pose suggestive of drunkenness. The original was commissioned by the high ranking Cardinal and collector of antique sculpture Raffaele Riario for his garden, but was rejected by him and instead bought by Jacopo Galli, Riario';s banker and a friend to Michelangelo. Along with the Pieta the Bacchus is one of only two surviving sculptures from the artist';s first period in Rome. Sitting behind Bacchus him is a faun, who eats the bunch of grapes slipping out of Bacchus';s left hand. With its swollen breast and abdomen, the Bacchus figure suggested to Giorgio Vasari "both the slenderness of a young man and the fleshiness and roundness of a woman", and its androgynous quality has often been noted, and the sense of precariousness resulting from a high centre of gravity can be found in a number of later Michelangelo';s works, most notably the David and the figures on the Sistine Chapel ceiling.