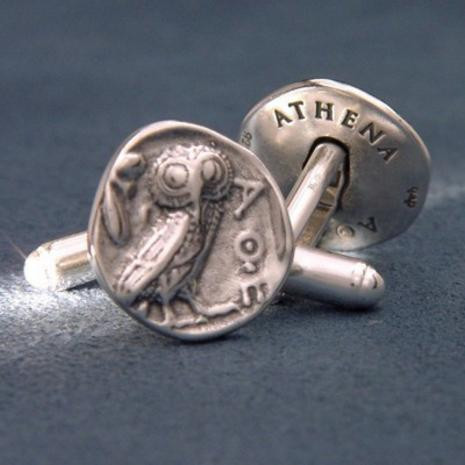 Athenian Owl (Goddess of Wisdom) cufflinks from an original coin dated c. 525 - 430BC now in the collection of the Art Institute of Chicago. The obverse shows the head of Athena, tutelary goddess of the ancient city-state of Athens, which worshipped her in many shrines, notably the Parthenon (the temple of Athena Parthenos). As on this coin, the goddess is usually depicted with a helmet, reminiscent of the myth of her birth: that she emerged, in full armor, from the head of her father, Zeus. The fighting Goddess of Wisdom, her symbol is the owl. This owl is depicted on the reverse of the coin, together with the first three letters of the Greek word Athens (AOE). The coin is a tetradrachm or four drachmai. The drachma was a unit of weight and hence, as this weight in silver, a unit of money. The silver original, a gift of W. F. Dunham, is in the Art Institute of Chicago. The reverse of the cufflink design is engraved with the name of the goddess Athena in Greek and English.