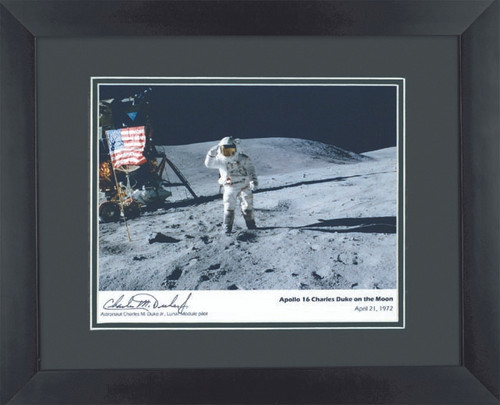 Charles Moss Duke, Jr., a retired USAF Brigadier General, was a United States astronaut and engineer for NASA. Duke served as a member of support crew for Apollo 10, served as Backup Lunar Module Pilot for Apollo 13 and 17, and served as capcom for Apollo 11 where his distinctive southern drawl became familiar to viewers around the world. In 1972, Duke served as Lunar Module Pilot for Apollo 16, which was the tenth manned mission in the Apollo program and the fifth to land on the moon; making Duke the tenth person to walk upon the surface of the Moon. The mission was launched on April 16, 1972 and concluded on April 27. Apollo 16 was the first scientific expedition to inspect, survey, and sample materials and surface features in the Descartes region of the rugged lunar highlands. It was a J-class mission, featuring a Lunar Rover and astronauts brought back 94.7 kg of lunar samples. It included three lunar EVA: 7.2 hours, 7.4 hours, 5.7 hours and one trans-earth EVA of 1.4 hours. Duke commenced the record setting lunar surface stay of 71 hours and 14 minutes by maneuvering the lunar module Orion to a landing on the rough Cayley Plains. Duke filmed the only pictures made of the rover in action-its record setting speed was 17 kilometers per hour. Apollo 16 returned to a heros welcome with Duke, Young and Mattingly each receiving NASA Distinguished Service Medal. This print is personally signed by Astronaut Charles Duke. Certificate of Authenticity included.