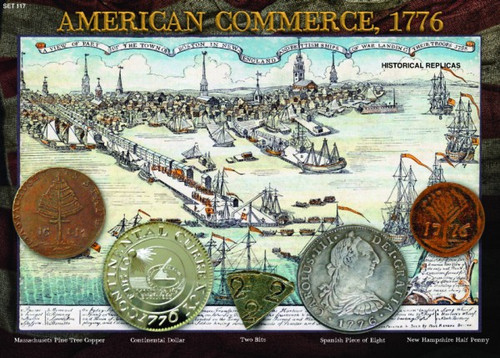 In 1607, the first permanent English colony in the Americas was founded as a private economic venture in Jamestown Virginia. The Virginia colony was a privately funded with a primary purpose to grow and export tobacco to Europe. By 1776, all thirteen English colonies had a vigorous mercantile trade in sugar, rice, tobacco, beaver skins, and a wide variety of goods and services. English colonial transactions were denominated in local units of pounds, shillings, and pence. Commercial payments included short-term book credit, payment in commodities, paper money or bills of credit, and specie coins including English coins, foreign gold and silver coins of Spain, Portugal, Netherlands, France, and Germany. Our Historical Replica Sets includes double side examples of domestic and foreign coins struck in 1776, the first year of the American Revolution and birth of the United States of America. Pine Tree Penny of 1776. Apart than it was engraved by Paul Revere, little is known about the origin of the copper Pine Tree pattern cent dated 1776. The obverse has a crude pine tree with the inscription Id LM. The reverse shows the goddess of Liberty, seated on a globe holding a liberty cap and staff with a dog at her feet. The legend, Liberty And Virtue surrounds the figure. Continental Dollar 1776 The Continental Dollar was originally intended to be redeemed for the Continental paper currency issued and distributed to finance the Revolutionary War. Shortage of silver forced coinage in brass and pewter, giving rise to the expression, not worth a Continental. The obverse shows a dial, a median sun, the word Fugio (time flies), and Mind Your Business, words credited to Ben Franklin. On the reverse, thirteen linked circles representing the original states, ring the words, We are One. Spanish Silver 2 Bit and 8 Real Bust Dollar of 1776 The Spanish silver dollar was the premier coin of the Atlantic world of the 17th and 18th century. Making Change: The Spanish silver dollar was frequently cut in half (4-bits), quarters (2-bits) and halved again to make small change. The 8 Real Silver Bust Dollar of 1776 includes the portrait of Carlos III (1759-1788) and legend Dei Gratia (by the Grace of God). The reverse shows the Pillars of Hercules, gates to the new world. Ribbons are inscribed with the statement Plus Ultra (more beyond) and the inscription Hispan et Ind. Rex (King of Spain and the Indies), crowned shield bearing the towers of Castile and rampant Lions of Leon. New Hampshire Pattern Halfpenny 1776 New Hampshire was the first state to establish its own coinage following the Declaration of Independence. William Moulton (WM) made a limited number of cast copper pieces. Obverse; Tree on straight ground. Reverse shows the initials of William Moulton WH. Our Museum Historical Replica Coins are made of lead free pewter and have COPY stuck on the reverse in accordance with the Hobby Protection Act.